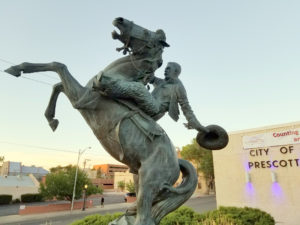 The City of Prescott anticipates bringing aboard a new economic development project manager after an interviewing and hiring process tied to its July 29 application deadline. The selected candidate will manage two work streams: attracting, expanding and retaining retail, commercial and industrial ventures; and pursuing technology innovation and high tech employment.

Staffer Wendy Bridges, who most recently served as Prescott’s economic development coordinator, has joined the City of Avondale as a business development manager. She was recognized as 2018 Economic Developer of the Year by the Arizona Association of Economic Development.

Bridges was praised by Heiney for multiple contributions through the years to the City of Prescott. She launched the “Prescott’s Best” business recognition program requested by Mayor Greg Mengarelli and helped recruit CP Tech. The firm, a manufacturer of rugged and custom computer hardware for the defense and industrial markets, broke ground in June on a headquarters and manufacturing facility near the Prescott Regional Airport (PRC). (See related story, p. 1.)

Robb has been collaborating with Embry-Riddle Aeronautical University (ERAU) and the Yavapai College Career and Technical Education Center (CTEC) in creating the Center for the Future, a business incubator slated for completion in the next 18 to 24 months. According to Heiney, Robb’s contract with the city is current through Aug. 31, with an option for the Prescott City Council to extend it.

“Jim has been a vocal advocate for bringing high technology careers to Prescott,” Heiney said. “His contacts in the venture capital and high tech world have really helped to put Prescott on the map with investors. He has also done a fantastic job coordinating and connecting the city with ERAU, CTEC and other programs.”

ERAU’s Interim Dean and Professor of Cybersecurity Jon Haass, Ph.D., has identified the Center for the Future as “a focal point for technologies that will bring jobs, innovation and partners to Northern Arizona and retain students, faculty, entrepreneurs and philanthropy within the community.”

Prescott City Manager Michael Lamar described the Center for the Future as “an exciting prospect for business development in Prescott. It will give us an opportunity to support locally grown enterprises, especially in the high tech industry.”

Lamar recently announced plans for a comprehensive master planning process for North Prescott, Heiney explained, to include the airport, the Center for the Future, the Deep Well Ranch area and the Arizona Eco Development, LLC (AED) properties.

“We hope to get this in front of the City Council very soon,” Heiney said. “This process will help set priorities and a way forward for Prescott to grow in a managed and sustainable way. The city’s commitment to sustainable high tech and manufacturing careers for our citizens remains a top priority.”

Heiney added that Mayor Mengarelli has made regional cooperation a cornerstone of his tenure. “We look forward to working with our higher education partners, our partner agencies and our neighboring municipalities to promote the assets of our entire region. Our belief is that an economic development win for any of the towns or cities benefits the entire region.”

Heiney cited a regular county-wide call/meeting with regional economic development professionals, chambers of commerce and tourism offices, and Yavapai College, which has occurred since the onset of the COVID-19 pandemic. He explained that the meetings address ways the region can assist businesses through the crisis. The city, he said, would like to see those meetings continue.

“We will also seek to work even more robustly with economic development partners such as the Arizona Commerce Authority (ACA), the Northern Arizona Council of Governments (NACOG) [and] the Prescott Chamber,” Heiney added.

Ongoing objectives of the city include finding ways to create careers for graduates who wish to hold post-university jobs here, as well as diversifying the local economy.

“Whether attracting new businesses or qualified employees, we need to address concerns of their spouses and families who will also need to find jobs and educational opportunities for their children,” Heiney said. “The market is very much in need of additional rental inventory, especially apartments [multi-family] in the range that we call ‘workforce’ housing. The new units coming online should reduce the shortage and normalize the market, creating more affordable options.”

Travel into and out of Prescott has been enriched with the renewal of the PRC essential air service contract with United Express, operating as SkyWest Airlines. That alliance, along with construction of the new state-of-the-art terminal, “will enhance the passenger experience [and] will position PRC well for future growth,” Heiney explained.

Prescott’s average growth rate of between 1.5 and 2% is below that of neighboring Prescott Valley and well below Maricopa County cities at 4 to 7 percent, he noted, when asked about retaining what locals like about Everybody’s Hometown.

“Prescott’s growth rate has long been sustainable,” he explained. “City leadership remains committed to preserving what we love most about Prescott – our Western traditions, our amazing outdoors, our thriving cultural scene and our ‘hometown’ feel. We hear over and over again that is why folks want to move or bring their business here and we are committed to keeping this in place.” QCBN