You are here: Home / Columnists / Revenge of the Closeted Curmudgeon 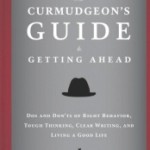 Take the following test, checking all that apply:

If you checked any of the above, you are well past 40 or a curmudgeon (but most likely both), and Charles Murray’s new book, “The Curmudgeon’s Guide to Getting Ahead,” isn’t for you. Curmudgeons, by the way, come in both genders and include not only 40-year-olds still trying to appear “open-minded and cool” but also – definitely – people in their fifties with the likelihood going up “precipitously” as we age. According to WikiHow, curmudgeons aren’t just Walter Matthau types (or for an even older generation, W.C. Fields types) but describe those who are “supremely independent thinkers” and “very wise.” As a curmudgeon myself, I strongly endorse that definition.

Self-identified curmudgeon Murray targets his book to the young, but especially, to those newly entering the adult work world. His advice is exceedingly practical. Since most supervisors, at most workplaces, will be in the 40+ range, and will have grown up with a particular outlook and set of values, it pays for younger people to see things from a curmudgeonly point of view. “The transition from college to adult life is treacherous,” Murray states. Consider that today’s universities aim towards job readiness but disdain the old model of preparing for life. A young person might be trained to write a marketing plan or design a webpage, but hasn’t a clue about the accepted rules of behavior that translate into promotions and success. In other words, the young emerge into adulthood “not knowing how an office environment operates or how superiors are evaluating them.”

You are more likely to encounter a curmudgeonly supervisor than not. Rather than being overtly crusty and cantankerous, they tend to be polite observers of you, young person – your behavior and attitudes – tabulating plusses and minuses recalled later when it’s time for promotions or peachy assignments. Politeness dictates that most of us are closeted curmudgeons. We never admit to judging you on the basis of our “inner curmudgeon,” but we do.

So, what are the things that rankle us about new workers? Murray’s table of contents provides an essential list. Chapter Two, for example, is entitled: Don’t use first names with people considerably older than you until asked, and sometimes not even then. Chapter Six covers piercings, tattoos, and hair of a color not known to nature. Chapter Eight warns, “Office emails are not texts to friends.” Murray notes that the age-old assumption that the younger generation has “gone to the dogs” might have some truth. Supervisors in their fifties and older got up at five in the morning to deliver newspapers when they were nine or 10, babysat in their teens, or did hard physical construction, laid pipe, or painted houses long before they landed their current management jobs. Curmudgeons, Murray writes, “are irritated by the complaints they hear about today’s job market as if in the olden days every college graduate went directly to a meaningful job with a career ladder.”

So, avoid negligent rudeness (like obliviously standing in people’s way), don’t roll your eyes when asked to do a task, use cuss words only when absolutely necessary (and not as filler in everyday speech) and pay attention to spelling and the proper use of English. Even blue collar supervisors, according to Murray, have an appreciation for good grammar and notice your neglect of it. In sum, don’t expect to get ahead just because you’re you. The curmudgeon in the closet is watching. QCBN