You are here: Home / Local News / Searching for Water 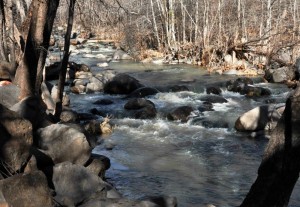 In his recent State of the City comments, Prescott Mayor Harry Oberg was forthright in thoughts about water.

He continued, saying moderate growth levels are necessary to prevent economic stagnation, and that the juncture of water and growth perhaps present a dilemma for Prescott, because the community is landlocked.

He essentially repeated one of his campaign pledges: to continue investigating the feasibility of importing water from the Big Chino Aquifer.

He has discussed such a project with some members of the Arizona Congressional delegation and the possibility of a public-private partnership is being explored.

“I believe the estimate of a $250 million cost to build the pipeline from the aquifer to Prescott is extreme. I am confident that cost can be reduced substantially.”

Council member Jim Lamerson (who serves as mayor pro tem) agreed. “We must act in the best interest of the city and its residents to assure a stable water supply.”

Lamerson, who chairs the Council’s Water Issues Committee, recently noted that the city’s three-month suspension of requests for alternative water is under consideration again. The intent is to give city officials sufficient time to review water service agreements.

Lamerson was emphatic that the city was not running out of water.

Fann acknowledges that concern about water resources and the sufficiency of the water supply presents challenges. Years ago, he discussed the possibility of the Arizona Department of Water Resources forming the Prescott Active Management Area (AMA), which was intended to ensure discontinuance of overdraft of the aquifer and the reaching of safe yield.

Fann, whose family has been in business in the Prescott area since the 1960s, insists that he wants to protect the environmental and ecological integrity of Central Arizona.

Fann also is a member of the Central Arizona Partnership, an organization that tries to research and educate its membership and the public to support practices and policies in the best interest of communities.

Fann suggests that water consumption outside the Prescott AMA occurs largely because of private wells on private property, and they are not subject to the same levels of control and regulations those within the AMA.

Fann indicated one means by which uncontrolled regulation of water can occur is through annexation by municipalities. They can then regulate growth, housing density and other factors that impact water usage. His statement praised Council members for their ongoing efforts to solve the issues.

Fann also endorsed the plan to build a pipeline to import water from the Big Chino Aquifer located just northwest of Paulden.

More than 10 years have passed since planning began to import water from the Big Chino Basin to the communities of Prescott and Prescott Valley. In that time, meetings, studies and negotiations have occurred among officials from Prescott, Prescott Valley and the Salt River Project (SRP). Founded in 1903, the Tempe-based public utility is one of the largest in Arizona and has two primary purposes: support for agricultural improvement activities and generation of electric power.

SRP has four dams on the Salt River and four more on the Verde River with rights to most the groundwater throughout Central and Northern Arizona.

Negotiations about tapping into the huge aquifer have often focused upon what would occur to the flow of the Verde River, which has its headwaters near the same area as the Big Chino Water Ranch project.

Heated discussions have ranged from “Pumping water will reduce the flow of the Verde River” to “Taking water from the Big Chino will have no impact on the Verde.”

Currently, the three entities are collaborating on groundwater monitoring and scientific modeling studies. The intent is to ascertain if the thousands of acre feet of groundwater piped to the Quad Cities area would lower the aquifer and the adjacent Verde River.

In recent months, a myriad of groups have convened to develop plans and strategies to assure a safe, reliable water supply in Arizona.

Several participants were from the Quad Cities and greater Yavapai area.

As Tara Jackson, president of Arizona Town Hall, noted, “Sustainable water supplies have been a topic at various town halls for the past five decades, but never before has the population in arid Arizona faced such persistent competing demands for water.”

From those presentations and panel discussions came key recommendations, which have been passed along to community, county, state and national governmental agencies and organizations.

The final report emphasized that while metropolitan Arizona does not face a water crisis, the opposite is true in rural Arizona, including, of course, Yavapai County.

Among other Arizona groups were these:

community and student leaders to address the topic, “Water: Protecting our Most Precious Resource.”

Republic conducted a symposium Nov. 3 in Tempe. The focus was to hear leading water experts and policy makers discuss what is necessary to sustain future water supplies.