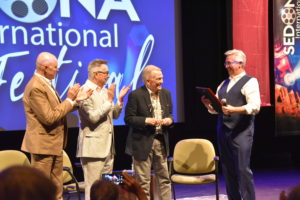 The event, usually held in late February, ran from June 12-20, as it was postponed because of the pandemic.

The entertainment industry brings us beauty, makes us think and laugh, and touches our hearts. The 27th Sedona International Film Festival, June 12-20, did just that with more than 180 films, from documentaries to feature films and animated shorts, and special celebrity appearances and performances.

Some movies were streamed to ticket holders and others were featured before a live, socially-distanced audience, like “Perfumes,” which brought a collective sigh of relaxation with scenes from France’s picturesque countryside.

Directors like Nicholas Bruckman with “Not Going Quietly,” and Sebastian Siegel with “Grace and Grit” shared heartbreaking and inspirational stories about people who make the most of living while facing debilitating and life-threatening illnesses such as ALS and cancer.

“When I sat down with Ady,” said Bruckman about attorney and activist Ady Barkan, the central figure of the documentary, “he had his shirt off, he just had no sense of pity and was the funniest guy I ever met. He has an amazing attitude and has turned his ALS into a weapon with humor and joy to overcome the disease to make a better world for his son.”

“Any musician, any writer, any filmmaker is ultimately making something to help people feel, to go through an experience,” said Siegel as he discussed “Grace and Grit,” his film about Treya Killam Wilber who was dying from cancer, and the intense and committed love she and her husband, author Ken Wilber, shared through the disease. Siegel said he wanted to express the “urgency to love” that he found underscored in the original book, “Grace and Grit,” by Ken Wilber.

Spiritual leader and 2020 presidential candidate Marianne Williamson shared the stage with Siegel to bring attention to the disease of cancer, which she says kills 600,000 Americans a year. “I have worked a lot with people who have been diagnosed with life-challenging illnesses and one of the things I’ve seen repeatedly is that in the first five minutes, you just drop so many layers of seemingly meaningless preoccupations and things get very real and very exquisitely noble and intelligent very quickly.”

Legendary costume designer Bob Mackie flew in to take the audience on an elaborate sequined and feathered stroll through the decades with his designs for Diana Ross and the Supremes, The Carol Burnett Show, Cher, Elton John, P!nk and many many others in between. In a question and answer session with the audience, he left this style tip: “Just be yourself!”

American classical violinist Elizabeth Pitcairn performed at the Sedona Performing Arts Center (SPAC) with the actual mysterious, unique and historic 1720 Stradivarius violin nicknamed the “Red Mendelssohn,” which was the inspiration for the Academy Award-winning film “The Red Violin,” also shown during the festival.

“To me, it’s something that I’m incredibly fortunate to have and I feel a responsibility to do something important with it to the best of my ability,” she said.

The one-of-a-kind instrument, valued between $15 million and $25 million, will one day be sold with her estate, with proceeds benefiting charities as the instrument’s centuries-old journey lives on. “It will pass from my hands to future generations.”

The event, usually held in late February, ran from June 12-20, as it was postponed because of the pandemic. It typically generates about $4 million in revenue for Sedona and local businesses and attracts 12,000 attendees, more than half of whom are from out of town, says Sedona International Film Festival Artistic Director Patrick Schweiss. Northern Arizona businesses and organizations make the event possible through sponsorships, including local hotels that donate hundreds of room nights and restaurateurs who host receptions. QCBN