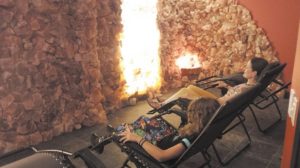 The only time a health professional usually mentions salt is to warn the public not to eat too much of the most basic food additive, as it raises blood pressure, affects kidney function and more. However, people have known for thousands of years that the right kind of exposure to salt appears to have surprising health benefits, and many swear by the healing effects of an Epsom salts bath. While therapies involving salt are not new to Northern Arizona, two new Sedona businesses are now offering a cutting edge “saline solution” that is one of the top health and wellness trends worldwide: salt rooms.

Nothing can fully mimic a salt mine’s environment but that is the objective of halotherapy, or salt therapies. “The health benefits were discovered by salt cave workers, and in the Middle East and Asia where people hid in caves and seemed to come out very healthy,” said Heidi Kenney, director of the new Sedona Health Spa at The Collective Sedona (VOC), which now offers the holistic treatment.

First, salt in the form of 99.99 percent pure sodium chloride is heated then pulverized to red-blood-cell sized particles. Then, these particles are sent into a room where clients receive the therapy, breathing and absorbing the salt. According to Kenney, salt therapy benefits include weight loss, detoxification, improved brain function, stress relief, balanced hormones, allergy therapy and help with acne or sensitive skin irritations. She recommends no more than two sessions a week for no longer than eight weeks. Halotherapy in general is not yet a federally recognized medical treatment.

Said to have anti-inflammatory, antiviral and antibacterial qualities, this form of halotherapy is used as to treat respiratory ailments, like emphysema and seasonal allergy symptoms. “It’s like a Neti Pot for your body,” she said. “Instead of just your sinuses, you’re flushing your whole system! People will get addicted to it.”

She says this treatment should be avoided by those with high blood pressure, hypertension, chronic kidney disease, serious breathing disorders and certain immune systems concerns, Side effects appear to be signs the therapy is working: sinus draining, slight cough, fatigue from toxin drainage and minor skin irritation.

At the Sedona Health Spa, halotherapy is administered in its purpose-built Salt Room that blends function and form. Hand-mined Himalayan salt covers three of the four walls for an added therapeutic effect that also makes for a visually stunning and relaxing environment. The room is kept at 74 degrees by a LED and natural light.

“It’s warm, but nothing like a sauna,” said Kenney, who loves the fine layer of salt the treatment leaves in the room as evidence. Up to six people can be treated at once and prices start at $45 per person (sedonahealthspa.com/services/the-salt-room/).

Similar halotherapy is also being offered in West Sedona by Healing Salts Spa, which opened last month and offers open and private room sessions starting at $60 per person (healingsaltspa.com).

Other salt therapies available in the region include sea salt scrubs, saltwater float therapy and mineral sea salt soaks that are much like high-end Epsom salt baths. Purported therapeutic effects and counter indications mirror those of salt-room halotherapy, with a greater emphasis on circulatory and skin benefits and less on respiration and detoxification, according to treatment descriptions. QCBN

Soaking in salt rooms, like this one at Sedona Health Spa, is said to help people lose weight, increase their brain activity and provide relief from stress and allergies.