You are here: Home / Local News / Shonto Brownie Sets Example for Giving Back 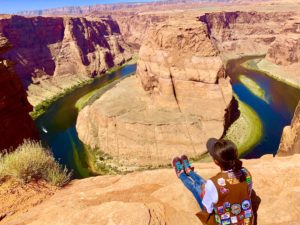 Kylee Henry is nine years old. Already, she has a deep appreciation for state and national parks, tribal lands and other sacred places. She hopes future generations will be able to enjoy them and learn about history. “I want to help people protect and preserve the land,” she said.

On a warm August day, Kylee volunteered with Glen Canyon’s Graffiti Removal and Intervention Team (GRIT) and other volunteers working with Glen Canyon National Park to clean up sandstone surfaces at Horseshoe Bend near Lake Powell. She recruited her mom, Althea, and her five-year-old brother, Ash, to join in the effort.

“People were drawing on the rocks and ruining the scenery. We had to scrape it off,” she said, noting that one day the only art she would like to see at these sites are original petroglyphs and pictographs left behind by prehistoric cultures.

Kylee lives on a farm northeast of Tuba City in the community of Shonto on The Navajo Nation. She is a Brownie, which is the feeder camp into the Girl Scouts. Althea says Girl Scout values of caring for the environment and giving back to the community have brought out the leader in her daughter.

“The Girl Scouts have helped her open up and communicate better, and work as a team. She was a little shy at first, but now she’s traveling, networking and making friends.”

Some of her new friends include park rangers at the Navajo National Monument. Recently, she helped them plant corn, beans, squash and onions as part of a cultural gardening project. The objective is to teach visitors about food sources of ancestral Puebloans who farmed in Northern Arizona in the 13th century.

Currently, Kylee is in the third grade at Shonto Preparatory School. Her baton twirling skills and talent for styling a traditional Navajo bun in Ash’s hair helped her win the title of Little Miss Shonto. At home, she helps Ash with his school work and takes care of chickens, sheep, ducks and other animals her family raises. She understands this is great training for her future career as a veterinarian.

“I’ve very proud of her,” said Althea. “The feedback I hear from her teachers is that she’s a good helper, always getting up to help. They mention her leadership skills, too.” QCBN