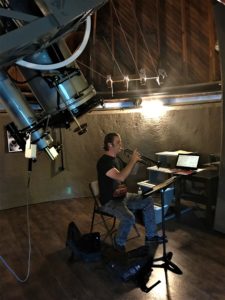 Fascinated by solar scenes he had experienced while visiting Lowell Observatory in Flagstaff and the Jim and Linda Lee Planetarium on the Embry-Riddle Aeronautical University (ERAU) campus in Prescott, Curtis Peacock composed “Starkeeper Sonata” last summer.

Peacock, who teaches humanities at ERAU and is the band director at BASIS School in Prescott, explained that he and his wife, Lyndi, and his parents had been attending astronomy programs in both Flagstaff and Prescott.

“My parents, Jane and Roger Peacock, have attended virtually every program presented in the planetarium in the past two years. When I attended “Beyond the Solar System – Exploring Alien Worlds” in the spring 2019, I was inspired. And when I visited the famous Pluto Dome at Lowell in Flagstaff, the music took on its own life.”

Peacock created his sonata for trumpet and piano in what he calls “…essentially classical form, but with elements of jazz.” The music is intended to evoke vivid scenes of a visit to a fiery pulsar star.

The premiere of “Starkeeper Sonata” is scheduled for Wednesday, April 1, in the Kitt Recital Hall on the Northern Arizona University campus, where Peacock had taught.

Peacock’s parents, both retired educators from Winslow who now live in Prescott, said they are delighted to see collaborative efforts between Lowell and ERAU. “All our careers, we’ve encouraged educational programs that will light up children – inspire them to explore the world with curiosity. We’re so grateful to ERAU and to Lowell for making such powerful educational experiences available to such a broad public. We know it’s been said many times. We, all of us, owe the Lees for encouraging the broadening of such educational opportunities.”

Prescott residents Jim and Linda Lee were instrumental in the planetarium’s creation. QCBN