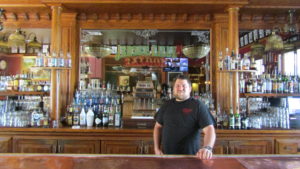 Music and dancing has returned to the Quad Cities area and is starting to return to the Flagstaff area, with a lot more planned for May. The scheduling of more live music gives musicians, venue owners and customers hope for the future.

Prescott area venues never totally shut down the music during the pandemic, but solos or duos were playing instead of bands, and there was no dancing on the dance floor, per the safety protocols in place.

Sidekicks Lounge in Prescott Valley and Jersey Lilly on the square in Prescott are just two places where the owners are thrilled to be in the process of bringing music back to normal levels. Other entertainment venues, like the Highlands Center for Natural History, are also bringing back music.

Mortimer Farms in Dewey has scheduled its Friday Night Barn Dance and dinner from May 7 to Oct. 30.

The Highlands Center for Natural History has scheduled its monthly concert series starting May 28, starting with Art Podell, one of the original musicians with the New Christie Minstrels. The Acoustic Eidolon duo will perform July 2. Prescott folk band Ponderosa Grove will perform July 24. Shakespeare in the Pines is scheduled during the middle two weeks in August and Acoustic Blues is on the calendar for Sept. 24.

Folk Sessions at the Highlands Center for Natural History has its ninth annual Americana Music Fest set for July 22, featuring “Southwestern Americana,” tales of Nancy Elliot, the Robby Robertson Trio and the Valley’s Hambone. Concert host Highlands Center Marketing and Communications Coordinator Tom Agostino said the pandemic impacted the center quite a bit. “We had to cancel our summer series last year,” he said.

Laura Lee Morgan, who, with her husband, John, owns Sidekicks Saloon in Prescott Valley, said the community needs live music because people thrive on interaction. “It was depressing not having it,” she said. “It’s great having it back. That’s why we’re in the business.”

Jersey Lilly Saloon owner Josh Makrauer says that although the past year has been difficult, as the venue lost about 50% of its business, he is excited to be able to provide some fun music for the patrons.

Sidekicks has live bands every Saturday and karaoke on Friday and Sunday nights. The schedule for Saturdays in May has Parker Jenkins on May 8, Shake of Yesterday on May 15, Hit Squad on May 22 and Honey Girl on May 29.