You are here: Home / Business / Sports Doctor Keeping NAZ Suns in the Game 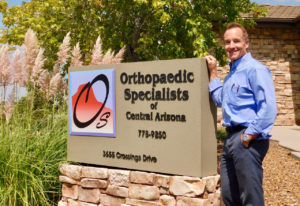 Most people’s first introduction to Bradley D. Williams, M.D., is due to medical reasons. Williams is a well-known orthopedic surgeon whose medical and academic training and subsequent experience have enabled him to regularly perform challenging joint replacement, arthroscopic shoulder and knee surgery, as well as pediatric and fracture care.

In April, he performed the first computer-navigated shoulder replacement ever done in Northern Arizona on an 88-year-old female patient who has since totally recovered.

His work and research experience provided opportunities for him to work with NASA, Vanderbilt University, the Shriner Burn Center and the Olympic Training Center in Colorado Springs, Colorado.

In Arizona for the past several years, Williams was with the hospital in Cottonwood before moving to Prescott. “I really enjoyed my work in the Verde Valley, but I found I was working 70 and 80 hours a week. I just didn’t have time to enjoy my wife, Brenda, and the three kids. I also wanted to continue being actively involved in sports. That’s why we moved to Prescott, so I could have more independence and more time with family. My family is the most important thing in my life.”

An athlete since early childhood, Williams said, “I just enjoy the camaraderie of sports competitions of all kinds.”

Williams is a doctor with Orthopaedic Specialists of Central Arizona in Prescott and also is the team physician for the Northern Arizona Suns basketball team. Their home court is the Findlay Event Center in Prescott Valley.

“I’ll be called by the visiting teams for medical advice and care. Best of all, I’ll get to see some of the best basketball players on their way up in the NBA,” he said.

The most common basketball injuries Williams will see are ankle and foot trauma, hand injuries from hitting the rim, facial injuries, which he stitches up in the locker room, and other strains, sprains and bruises.

“I love getting to know the players and getting them back in the game as efficiently as possible. It’s their livelihood. They’re really awesome guys.”

Williams is a committed cyclist. He is as serious about his bicycle competitions and bicycles as he is about caring for his patients and working with the NAZ Suns. He strives to work out daily; however, his family and medical duties take priority. Otherwise, he trains rigorously when he can, four or five days a week. “To be competitive, bike racers have to be in exceptional condition.”

Williams used to compete in 10 to 12 major races a year and was Arizona State Road Champion Cat-5 in 2014. He recently has taken a year off from being “too serious” so he can enjoy the sport and work on his mountain biking technical skills.

Races he has entered include the Annual Whiskey Row Off Road, a mountain bike event in Prescott. “This race attracts mountain bikers of all levels from all over the world, and is considered one of the most challenging in the U.S.,” Williams said.

One of his favorites, the Man vs. Machine bike race, pits cyclists against a 1930s-era steam railroad engine on a race from the Grand Canyon to the town of Williams, home of the Grand Canyon Railway. Held every September, except for the past two years because of construction, it attracts more than 250 bike racers from throughout the state.

In 2015, Williams placed second overall. “Well, third to the steam engine as we had a headwind that day,” he acknowledged with a grin. Williams covered the 53 miles in a time of slightly more than two hours.

His wife, Brenda, is an accomplished runner and has taken up mountain biking as well. His two sons and daughter are also athletes. The whole family enjoys riding bikes.

“There’s a joke about Prescott,” said Williams, “that bicycles on top of cars are worth more than the car itself.”

“Have faith, put in your best effort to do it right the first time and never give up.”

What characteristic do you most admire in your colleagues?

What is your favorite food?

What do you consider your greatest achievement?

“Being where I am now, with my wife,
Brenda, and my three kids. They are my reason for being.”

“Christmas. Seeing and being a part of all the spiritual ceremonies and seeing what a difference a generous spirit can make gives me intense gratitude for what I have. Having grown up poor, I have a deep appreciation for being able to share our good fortune with others.” QCBN