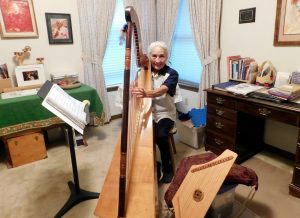 When Luana Mangold, 87, performs, it is often on a handmade Paraguayan harp she learned to play more than 30 years ago.

“When I play, it’s usually with strings attached,” she said with a smile.

Her strumming these past 20 years earned her a national honor. She was selected from nominees from among all 50 states as winner of the Good Samaritan Society “Ever Forward Champion Volunteer Award.”

Mangold was nominated by Adam Bissell, chaplain for the Prescott Good Samaritan Living Facility and Apartments, 1029 South Drive. “In one word, she’s a saint. As people are transitioning into the next world, to have that harp in the background is sublime. Mangold is someone who lives out the Good Samaritan values of courage, community and service.” He added that as a fellow musician, he has enjoyed her harp playing for more than a dozen years.

Bissell praised her for her commitment to hospice care and its patients. Mangold has played for many events, often weddings and anniversaries, and volunteered in venues ranging from museums, concert halls and hospitals, but most frequently, at hospice facilities.

She said receiving the award in South Dakota was a highlight of her adult career. She was accompanied by her son, Robert Mangold, who filmed and posted a video of her award on YouTube.

An American Indian from a large family of 17 siblings, Mangold was born in 1935 on the Jemez Springs Pueblo Tribe Reservation just north of Albuquerque and west of Santa Fe.  She was removed from her family at a time when Indian students were taken away from their homes and sent to Catholic missionary-sponsored boarding schools. She took classes in music from nuns, and later completed her high school education at Albuquerque Indian School.

She received a full scholarship to attend the University of New Mexico and later earned her master’s degree in health education from St. Joseph’s University in Philadelphia. A longtime Certified Music Practitioner, Mangold received that designation from the Music for Healing and Transition Program Inc., out of Hillsdale, New York.

When back East, she met and married Werner Mangold, a German-born engineer who came to the U.S. as a youngster. He then earned degrees in mechanical engineering and accepted a job that took them to Cincinnati for five years. They then lived in Germany for four years, while her husband was promoted into executive positions.

The couple returned to Rolling Hills, California, where Werner headed Aerojet General until he retired. They moved to Prescott in 1990. Werner died in 2004. They had 50 years of marriage. The Mangolds had three sons, two of whom are still living. Robert is in Las Vegas and Frank is in Denver. “I live in the same house we custom-built when we first moved to Prescott,” said Mangold.

Through classes at Yavapai College, Mangold expanded her dedication to music. Already a talented piano player, she discovered her love for the harp when she heard Cuban folk harpist Alfonso Ortiz play. Shortly thereafter, she bought a harp from him. She later worked in the health department at Yavapai Regional Medical Center and helped launch a music education program for employees. It was then discovered she could play both the piano and the harp for patients. She became known as “The Harp Lady on a mission of music.”

The slender, gray-haired musician describes her affinity for the harp. “I’ve often carried a smaller harp and played for many, many souls who have passed.”

She describes the harp’s mellow and gentle sounds as “heavenly tones.” Her favorite music is traditional hymns. “The sound is so majestic. The sound is soothing and peaceful,” she said.

Mangold performed on May 20 at the Good Samaritan Apartments. Wearing a Native American skirt designed by her sister, she entertained several dozen residents and their guests during a luncheon.

For more than 12 years, she had performed almost weekly at the Good Samaritan Society Prescott Hospice and Marley House. She said as she has aged, it has become more and more difficult to transport her harp from one location to another; thus, she is gently moving toward retirement. “Keeping my balance is sometimes awkward.”

“She has been so gracious and generous with her time and talent,” said Kelly Paradis, the senior living official for Good Samaritan. “Words are not capable of expressing the affection all of us who know her have for Luana.”

Mangold admits it will be difficult to turn down requests, so she may play on special occasions. She says she is grateful to the Prescott community that has welcomed her so affectionately.

“I’m pleased, though, to accept the thought that when you give of yourself, you get back much more,” she said. “I know I feel that way because of my experiences with Good Samaritan here in Prescott.”

I love the gentle reverberations that flow through the body and mind to soothe the person within. That’s especially true when a patient is near death. You don’t come into the world alone, and if you chose not to, why should you leave it alone?

WHAT I LOVE ABOUT THE HARP

It’s like playing a naked piano. All the strings are exposed, and the sound is so pure and gentle.

I am getting older. It became more of a struggle to transport my harp from place to place, even though it is a smaller one.

IN MY FREE TIME

I still do all my yardwork, housework, daily chores and exercise. And I’ll still practice a lot, even though I’m not playing as often.

O, Music. In your very depths, we deposit our hearts and souls. You have taught us to see with your ear and hear with our hearts.  – from Kahlil Gibran. QCBN