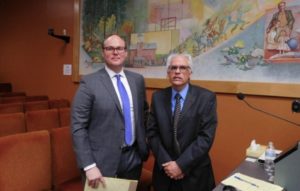 Some eyes were opened and some people were startled when they heard that, despite an increasing population and economic expansion, less water is being used in the City of Prescott now than 14 years ago.

In fact, water usage has decreased about 2 percent annually on average since 2014. That is what Prescott Mayor Greg Mengarelli told those attending a City Council work-study session Feb. 26. Mengarelli led the study session, saying, “I earlier did not have a great handle on our water portfolio, so we decided to get scientific data.”

The city contacted water expert Gary Woodard. Under terms of a $25,000 contract, Woodard began a long-term analytical study of past, current and future water conditions in early 2018. In his preliminary report in February, he presented initial findings. He will file a comprehensive final report later this spring.

Woodard emphasized that his study involved data collected from water meter and utility data from the city, county and state.

Possible Reasons for Decreased Water Use

During his 45-minute presentation illustrated with PowerPoint graphs and charts, Woodard cited four factors that seemed to be driving the decline of water usage in Prescott. Among them:

Construction of new water and energy efficient houses and businesses.

He noted some other factors unique to Prescott that affect water use. He said despite its population, only about 140 swimming pools were in the entire community. He also said only a few homes had evaporative coolers but instead used air conditioners.

Prescott’s water supply comes from a diverse portfolio. It includes groundwater, surface water and reclaimed water. That puts it in a better position than communities that rely upon a single water source. Additionally, in 1998, Prescott invested in two municipal reservoirs, which now serve as critical sources for the recharge program.

Several years ago, too, the City of Prescott began thinking of what is called “the Big Chino Water Pipeline,” a plan to import water from an aquifer northwest of Paulden. Mayor pro-tem Billie Orr said that Woodard’s presentation caused her to think of the Big Chino as a “…good insurance policy, but not something needed immediately.”

Woodard responded, “Your investment in the Big Chino aquifer was a smart one. I compare it to life insurance. You want it, in hopes that you don’t need it.”

Retired from his former position as a professor and administrator at the University of Arizona Water Resources Research Center and the NSF-SAHRA Water Center, Woodard has degrees in chemistry, public policy studies-resource economics, and a J.D. from the University of Michigan. He was involved internationally with UNESCO on water issues for arid lands. He was the co-author of the National Water Act for the Kingdom of Saudi Aribia. In more than 37 years of research about municipal water issues, he has directed and conducted studies around the United States, including water use models he developed for eight major municipal water departments and two water companies in Arizona.

“Gary’s credentials are unassailable,” said Mengarelli. “He has worked all over the world in the field and published dozens of papers. We were excited to hear what he had to say about Prescott’s water supply.”

City Manager Michael Lamar echoed Mengarelli. “Information being given to the City Council will change the dialogue about water in Prescott. This information also will have major policy implications for the council going forward.”

Woodard will present the final results of the longitudinal study later this spring in a public meeting.