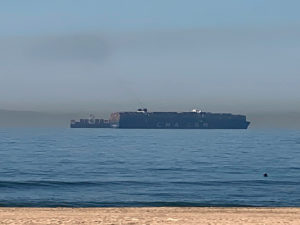 “It started with COVID over 18 months ago; consumer goods were just not being produced, and supply was lacking,” he explained.

With the holiday season upon us, many merchants and customers alike are watching the supply chain backlog at the Southern California ports. Up and down the coastline, the view includes large numbers of container ships facing delays in unloading.

The Western Hemisphere’s two largest shipping container ports are Los Angeles and Long Beach, each about a seven-hour drive from the Quad Cities.

The supply chain problems are not a new issue, according to Edmund Bushman, chair of the Yavapai Community College School of Business and Computer Science. “It started with COVID over 18 months ago; consumer goods were just not being produced, and supply was lacking,” he explained.

With each passing month since then and the pandemic-induced demand spike, officials at the ports have watched delays for unloading containers increase. In earlier times, containers would be unloaded from ships and sit at the docks for just a few days before being transported to other destinations. Now, there is a backlog of containers waiting on rail transfer or truck drivers, as well as a growing pileup of empty containers waiting for a return to Asia.

A spokesman with the Port of Long Beach reports that they expect to set a record this year by moving more than nine million TEUs (a measurement of twenty-foot-long containers). Despite expanding operations to a 24-hour schedule, the port lacks capacity for storing additional empty containers and facilitating offloading of the many waiting cargo ships.

Many people blame a shortage of truck drivers. Supply Chain Digest says that the number of people wanting to drive trucks is down since the start of the pandemic because former drivers can find similar wages without working 70-hour weeks on the road.

As if the massive delays were not enough to drive up prices in the marketplace, the ports have a new system of exponentially increasing fees for ocean vessels that are delayed in unloading containers.

What does this mean for the holiday shopping season?

Higher prices, says Bushman. While he thinks the supply-chain issues may be a short-term problem, he recognizes that they could be part of a new normal: long waits for goods.

It’s an imperative for shopping local, says Thomas Barr, vice president of businesses development for Local First Arizona. “A lot of our businesses are not at full capacity because of the pandemic. They’re still climbing out of the revenue declines,” Barr said, adding that with Arizona’s 100,000 small businesses, individuals should support them regularly whether there are supply chain delays or not.

Jerry Thomas agrees. As a legal document preparer and former chair of the networking group Prescott Power Partners, Thomas thinks a person should always try to shop locally first. “Many local retailers still have a large selection of gift choices. If we just open ourselves up to perhaps a more personal or hand-crafted gift, a more creative and thoughtful gift, rather than the big-buck item, Christmas would be more about giving from the heart,” she said.

These ideas may become part of the long-term focus, too.

Karen Scuncio, an international business development professional of more than 25 years, is concerned. “Many of the people in the freight-forwarding industry predict the supply chain problems are going to get a lot worse before they get better,” Scuncio said. She added that many of the supply chain challenges also are affecting the way people do business in the U.S. For example, she knows of company owners who, because of the difficulty attaining needed parts and supplies, are reducing the number and variety of items offered so they can focus on a smaller assortment and keep production going. QCBN