You are here: Home / Columnists / Supporting a Growing, High-Altitude Airport 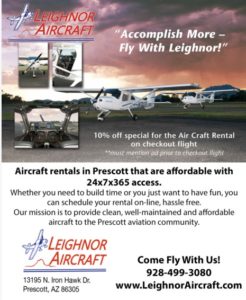 As I write this column on May 15, it is one of those columns I really wish I didn’t have to write. Recently, we had the local operators’ safety meeting, which is a gathering of all airport operators that includes all the flight schools, rental agencies, airport management and air traffic control. The purpose of this meeting was to discuss operational issues that affect operations at the airport.

There were several interesting and some distributing items reported.

For example, airport operations reported that noise complaints are way up. These complaints are reportedly coming from people who have moved in around the airport and are not happy that airplanes are flying over their property and making noise. This is unfortunate, as we are aware that residents in new developments near the airport must sign a disclaimer that states they know there’s an airport there.

We also learned that during fire season, the Forest Service will have a Boeing 737 water tanker based here. Can you imagine the noise complaints we’ll have when that aircraft takes off at all hours with full loads of water, screaming at full power as it flies over homes at low altitude?

I have written several columns on the economic value of our airport. We know jobs in Prescott are not the greatest, but things have been looking up. Companies such as Eviation have located here to take advantage of the local engineer talent educated by Embry-Riddle Aeronautical University.

One of SkyWest’s reasons for bringing airline service to Prescott is access to pilot trainees.

If the airport were to close or severely curtail operations, it’s difficult to imagine Embry-Riddle would remain in town. Losing a university would no doubt impact the number of quality jobs available here.

Further, if airport operations were reduced and ERAU were to move, would SkyWest stay? Probably not, in which case, all of us who enjoy the convenience of flying out of Prescott would have to seek air service a distance away, most likely from Phoenix.

Speaking of Embry-Riddle, their enrollment and demand for aviation training only continues to rise. This past year, the institution had roughly 150 students in the flight program. Projections for next fall are 280 students, nearly double this year.

That increase means even more air traffic for the area. My company, Leighnor Aircraft, has experienced an increase in operations, as has North-Aire and both helicopter schools. By this time next year, Prescott likely will be moving up from number 40 in the busiest airport category.

It’s important to note that Prescott Airport has a noise abatement procedure that all pilots follow as best they can; however, they are limited by what’s necessary for safety, given the high altitude and warm temperatures. Airplanes don’t develop full power in those conditions and pilots cannot reduce power sometimes without affecting safe flight operations.

For our citizens who like the changes and services at the airport, we must become more vigilant expounding the benefits of growing and improving air services.

Here are some ways you can support the airport: fly on the airline, do business with airport businesses, and even build businesses that cater to aviation enthusiasts, as we have a lot of people in this town that are passionate about aviation. Finally, support politicians who support the airport and modernization of our infrastructure. QCBN