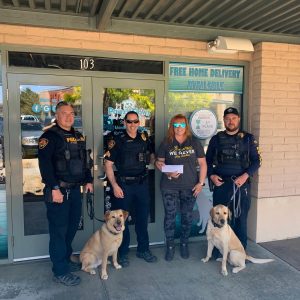 There are unsung heroes in our midst and they need our help.

Meet two of the police dogs of the Prescott Police Department K-9 Unit,

Cooper and Benny, yellow Labradors that are highly trained in the detection of narcotics.

Also known as Super Cooper and B-Dog, they work in concert with their two handlers, police officers Alltop and Crawford, to keep dangerous drugs off the streets in the Prescott area.

Although grants fund some of the needs of the K-9 Unit, little is left to cover the cost of emergencies and additional items needed for the basic care of the dogs, such as food and medicines.

Sandy Haffner, owner of Preskitt’s Pawz N Clawz pet store on Gail Gardner Way in Prescott, was moved to action when she learned of this gap in funding of the narcotics detection dogs.

“We are referred to as Grandma’s House for Benny and Cooper,” Haffner said. “We allow them to do whatever their hearts desire in our store. Cooper loves to pick treats from the raw bar and Benny picks out a new stuffed dog toy every time he gets a chance!”

When she opened her store in December 2020, Haffner offered free baths for Prescott police dogs using the two tubs and two showers in the self-service dog bath at her business.

“I met with the two canine officers at the time and they brought the two dogs in and washed their dogs,” she recalled. “They let me know the police K-9 unit is not funded by the departments, so they raise money for the dogs by doing merchandise sales. They sell t-shirts and police badges.”

Haffner invited the officers to set up tables outside her store to sell their merchandise and also to let people know their dogs are grant-based and funded by donations.

“With that information, I started fundraisers through events in my store,” she said. “We have raffled off baskets, had sponsors for events and did demonstrations to raise awareness. We would like to get the story out so all of Prescott is aware of this amazing K-9 program and that they could use our help. These dogs work and live with their handlers to get illegal drugs and the drug dealers off of our streets.”

Ridding communities of illegal drugs can be a dangerous job for officers, but police dogs can lessen some of the dangers for their handlers.

“Dogs are sent into dangerous situations for officers like bomb and hostage situations, with the dogs helping take down the criminals,” Haffner said. “When they pull someone over, dogs can alert officers that there are drugs in a vehicle or on a person. They’ve gotten a lot of fentanyl off the streets. It can take just a whiff to kill someone. There are teenagers who are dying from experimenting with them.”

She said that a visit to the Prescott Police K-9 Unit on Facebook shows several drug busts including photos of Cooper and Benny.

Efforts at the store to raise money to contribute to the costs of maintaining the two police dogs started right after opening with three tabletop set-ups by the two handlers to sell police merchandise both inside and outside of the premises.

In the spring, the pet store sponsored a more elaborate event.

“We did our first Fashion Dog Show in April 2021,” she said. “It was a success, considering I was new and still building my store. We raised a good amount of money for them, $1,600.”

The second annual Fashion Dog Show a year later was even more successful, raising more than $4,500 to benefit the police dogs.

“It was an ‘80s themed Fashion Dog Show. They had a variety of neon colors and leg warmers to show their ‘80s fashion style.”

Cooper and Benny and their two officers also participated in the June 2021 Woofdown Lunch, an annual event benefitting the United Friends of Animals, a Yavapai County non-profit that has found loving adoptive homes for more than 6,000 cats and dogs.

“That was another way for them to get out and introduce themselves to the public,” Haffner said.

The next noteworthy occasion that will highlight the work and heroism of police dogs will be a free demonstration day, 3 to 6 p.m., Thursday, Sept. 1, for National Police Fallen K-9 Day, in the parking lot at Preskitt’s Pawz N Clawz, at the Walmart shopping center.

“This event is an opportunity for our community to come together in memory of the fallen Law Enforcement K-9 Officers, while honoring the Tri Cities K-9s that continue to hold the line,” states a July press release.

“There are so many dogs that die in the line of duty and it’s so sad,” said Haffner. “We will have our nine local police dogs from different agencies here to demonstrate what they do. We have dogs that do bite work, narcotic detective dogs and dogs that go up into the mountains to find people, whether they’re dead or alive. It’s really a cool event; we did it last year. This year will be even bigger.”

Haffner is also a certified pet nutritionist, an interest that began when she and her family, husband Roman and their two daughters, were caring for their beloved dog, Kelcee, who suffered from severe allergies.

“We had a very sick German shepherd and we cared for her through her sickness. We did more research into pet nutrition, but ultimately we lost her from kidney failure. I decided to study pet nutrition online. We could have saved her if we knew what we know today. That’s why we’re saving other dogs today. We wanted to open a store that was not just a store but to educate the public to help their sick dogs and cats.”

The couple made the decision two years ago to move from Las Vegas, where they had a graphics sign store, to Prescott where they hoped to escape the heat and congestion and to launch their first pet store.

Today, the store specializes in pet nutrition, with high-quality food and treats, as well as accessories.

In-store consultations about issues of pet diet and health increases the store’s outreach.

For the hardworking police dogs, the key to their health is a completely raw diet, Haffner said. “It’s an all-raw diet, OC Raw, that these working canines are thriving on, because they are fed the most species-appropriate raw diet.”

The store is a woman-owned business, with Sandy holding a majority of the share. As co-owners, Sandy and Roman give a 10% discount to the department on all purchases, including the raw diet.

“We at OC Raw are so happy to see people like Sandy at Preskitt’s Pawz and Clawz support such a great cause, and are proud to support her in her mission and dedication to the community and those that protect it,” said OC Raw Vice President of Sales Tom Allen.

Haffner said there are a lot of supporters of the K-9 units in the Prescott area, including retired police and retired dog handlers.

“I know people would want to help,” she added. “They can donate at the police department, too.” QCBN