You are here: Home / Archives for Fly Prescott 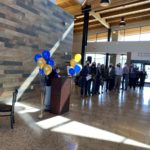 It was accurately called “the newest airport terminal in the world,” at least for one day. The $15 million Prescott Regional Airport Terminal (PRC) opened on March 30, with a formal ribbon-cutting commemorating the opening at 3 p.m. on March 31. The 18,000-square-foot modern building replaces … END_OF_DOCUMENT_TOKEN_TO_BE_REPLACED