You are here: Home / Archives for furniture

Woodworking master craftsman Dan Arterburn is upfront about the furniture he makes. “It’s not for everyone. I try to create something that will become a family keepsake, a valued heirloom.”

The former Nebraskan can be found in a Prescott gallery and workshop at 108 E. Hillside, Suite B. He has more than 31 years of experience, envisioning design concepts and then finding ways to make those visions become reality.

He takes great pride in the fact that no two pieces of furniture are ever the same, but even greater pride that he uses lumber that is salvaged, reclaimed or sustainably harvested. Through the years, he has built a circle of suppliers who know that he wants only wood that meets those requirements. He buys wood from a wide range of tree species, including pine, cedar, juniper, elm, aspen, Russian olive and walnut.

Arterburn opened his Prescott custom furniture business, IDEA Custom Furniture, in July 2015. Since then, he has been busy filling orders from a variety of customers from Arizona and beyond.

The name – IDEA – incorporates Arterburn’s first name, Dan, with initials from his daughters, Ellisa and Ande. Both are heavily involved in the business and are advocates of having customers work closely with their father in to find the furniture in the wood.

“I use only solid wood. Some of us grew up with disposable furniture made of particle board that lasted only a few years. I want to make furniture that will last forever,” he said. “The real artist in woodworking is Mother Nature. My job is to help Mother Nature turn the piece into something of lasting beauty, quality and functionality.”

For example, he used an eight-foot slab of walnut three inches thick for a headboard. That raw slab has live edges (wood not cleaned or shaved smooth) on each side.

“I labored for hours building the bedposts so they would ‘fit’ the edges of the slab as it was inserted into them. I spent dozens of hours hand-finishing the wood with natural oils so that the depth and the intensity of the grain would show through. It is unique, and the lady that ordered it was thrilled.”

Arterburn has not always been a furniture maker. He worked for contractors and built homes for several years, until 1985, when he moved to Phoenix. He then built custom homes in Phoenix, Tempe, Gilbert and other cites until he went back to Nebraska. He also had a cabinet shop, where he began creating his custom furniture.

“I think that’s when I discovered my passion for building really quality furniture. My daughters encouraged me to devote myself full-time to it. We discovered Prescott and liked the kind of ‘high end’ market that we discovered in the area. Of course, I liked the slower lifestyle and the quality of life in Prescott, too, after having been in Phoenix.”

Emphasizing that he prefers when clients are involved in the creation and design of the pieces, Arterburn said, “I want buyers to be fully engaged in the process so that I can personalize an order to their interests. Do they want to follow a design motif that they already like, or do they want to start their own family tradition? We’ll work together in looking at the raw wood and then use our imaginations to design and work with the wood, not at it.”

The largest piece Arterburn has created was an $8,000 conference table for a Houston client. The most complex – a $5,200 dresser with many drawers and dozens of hand-crafted box joints and wooden drawer guides. His most distant client lives in India. He built a wine rack and shipped it to him.

“I want to build furniture with a craftsmanship that will make it last forever.” QCBN

To view a photo gallery of Arterburn’s furniture, visit ideacustomfurniture.com. 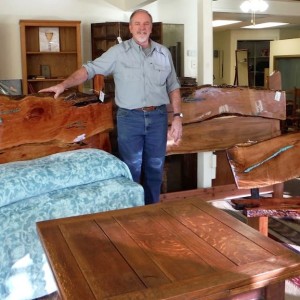 Robert Reynolds has spent half of his life in Colorado and the other half he is spending in Arizona.

Reynolds just opened Sidewinder Custom Furniture Gallery in Prescott, where he sells beautiful “live edge” furniture that he makes with his own hands.

He explains the furniture is made from a rustic slab of native wood, but what makes this furniture unusual and beautiful is that the edges, or the bark part of the tree, stays intact.

“I do coffee tables, benches, head boards and fireplace mantles. If there is a crack in the wood, I fill it with turquoise or copper or something like that. What makes the difference is making it available to the public. Many [furniture builders] work out of their garages,” he said. “Putting this in a retail store, they [customers] can buy an existing piece or order a custom piece.”

Besides his own creations from wood, Reynolds also sells antiques in the shop. “I’ve always liked wood furniture. I hate to see a piece of antique furniture go to waste. I find those I can repair, get out on the floor and revive it so someone else can appreciate it and use it.”

He says most antique stores look like their owners have hoarding issues. His shop is arranged like a fine furniture store and he strives to keep it uncluttered.

Reynolds is not new to the retail business world. He had a bicycle retail store for 14 years and was doing well until bike manufacturers began marketing their bikes to larger vendors.

“That left a lot of us in a bad position to make money,” he said.

Although he had a top-notch mountain biking team attached to the business, he decided to move on. And, he says, it is scary opening up a new store.

“I would have stayed in the bike industry if it hadn’t changed,” he said. “Leasing a building is always nerve-wracking. You have to have the confidence to make it work.”

And Reynolds has a lot of experience in the wood business. He worked for a large company that took on huge commercial projects. For example, one of his last projects was rebuilding the inside of the Pentagon after it was destroyed.

“We were contracted for the replacement of panels and doors. We would build the units and then truck them over to the Pentagon.”

Reynolds moved from Colorado to Arizona in 2011, reconnected with and married his Cortez High School sweetheart.

“Once when we were in high school she said, “If I married you, I would be Debbie Reynolds. Forty years later, it happened.” QCBN

“The first thing is you really gotta love what you do and be good at it. You have to have six months of operating costs before you open a store.”

What was your greatest work mistake?

“Picking a bad product that didn’t sell because it was cheap. I wanted to offer something cheap and I was struck with it.”

“Frank Lloyd Wright. He was just an innovator and very creative. People didn’t think his designs would work, but he always proved them wrong.

“Honesty. A willingness to work and accept one another and help each other. Someone with a happy spirit about them.”

“Usually it has something to do with politics.”