You are here: Home / Archives for Marvy McNeese 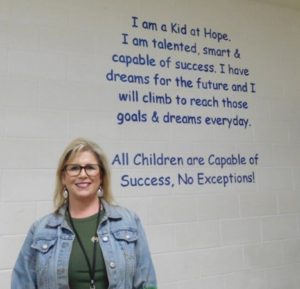 I stepped through the metal detector and was slipping my brown leather belt back through belt loops when I heard a lilting voice behind me.

“Are you Ray Newton?
I turned. A blonde-haired woman extended her hand. “I’m Marvy McNeese. Welcome to my school.”

She is the principal of Yavapai County Detention School, an extension of the first Education Service Agency in Arizona to become fully accredited through AdvancED.

McNeese led me through a series of electronically controlled doors and security camera monitored corridors into the classroom areas near her office in the Yavapai County Juvenile Detention Center. The facility, barely half-a-year old, is on the east side of Prescott Lakes Parkway. Beyond the school, it also contains facilities for Juvenile Probation, Juvenile Court Judge Chambers, Clerk of the Court-Juvenile Detention; ASTEP (substance abuse program) and other county offices.

As we passed through several security checkpoints, McNeese was greeted by staff and students. Virtually all cried out, “Hi, Marvy. How are ‘ya?”

She laughed. “My name is slang for ‘marvelous.’ I was the first born in 1968 to my family in Long Beach. My dad said he decided if they had a girl, he wanted to name her ‘Marvy.’ He said he used to listen to a radio DJ, who always said, ‘My wife is just Marvy – just Marvy Sue.’ So there you have it – I’m Marvy S.”

She led me into her office, immediately adjacent to bright, attractively decorated and fully-equipped classrooms. On the walls were bold inspirational messages such as this:

McNeese explained the Kids at Hope concept. “This is a pledge created by Rick Miller, the Phoenix founder of Kids at Hope. As a youth development practitioner, he wanted to counteract the old ‘youth at risk’ term. It is positive, rather than negative. We endorse it totally. We need to discard labels that are negative. Instead, let’s create a positive culture based on a belief system that all children can achieve. What’s more, every kid deserves to be loved.”

McNeese, the immediate past board president of Arizona Correctional Educators, said the Kids at Hope philosophy was initiated a little over 10 years ago by Miller. “It has become so popular, it has been adopted in school districts throughout Arizona.

“In our school, we have a staff of four – myself included – who serve 240 kids a year, 240 days a year, from 8:30 a.m. to 3:30 p.m. Many of these are broken kids who have committed offenses for which they must be held accountable.” She smiled, then emphasized, “But being detained does not define who they are, nor does it seal their fate. I – we – believe that if every kid has at least one adult in their life who cares, who encourages them to manage themselves and look to the future, there is hope in every child.”

Students at the school can range in age from eight to one day before their 18th birthday.

McNeese earned her bachelor’s and master’s degrees from Northern Arizona University. She also has Arizona K-12 Principal and Superintendent Certifications.

Her immediate boss is Tim Carter, Yavapai County Superintendent of Schools. “Marvy is completely dedicated to her students,” he said. “She is committed to getting them on the right track and keeping them there. She wants them to have the skills they will need for success in the future. Her students know she really cares about them as people. That makes all the difference.”

Director of Juvenile Court Services Scott Mabery, an official with the Arizona Superior Court, also works closely with McNeese. “The school that Marvy administers and teaches in is considered a model program throughout Arizona and internationally.”

Mabery also said the reputation of the juvenile detention-probation program is such that in 2015, governmental officials from Northern Territory, Australia, picked this program to model for working with troubled youth.

“Marvy’s school is the most innovative and creative in Arizona – a model for everyone,” Mabery said.

What’s the best advice you’ve ever received – and from whom?

“I don’t remember who told me this, but I accepted it. It was, ‘Take my advice. I won’t be using it.’ I think that’s hilarious, for it says don’t take yourself too seriously – and I remember that daily.”

If you could vacation anywhere in the world, where would it be?

“Give me a beach and a scuba tank, and I’m a happy girl. I don’t get either as much as I’d like.”

Our Christmas Box. Every year, my mom writes about family accomplishments, funny things that were said or happened. On Christmas Eve, we sit around the table and take turns reading about things in the past year. It makes each of us feel special. We are a quirky bunch.

What’s your favorite kind of music?

“Rock and Roll and disco. Without a doubt. I get to go to the Rock and Roll Hall of Fame this month. I cannot wait.”

What makes you laugh out loud – and heartily?

“The sound of a baby laughing.” QCBN