You are here: Home / Archives for Northern AZ Social 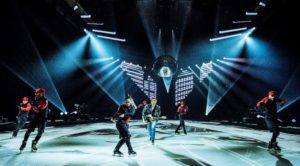 Cirque du Soleil invites you to an odyssey on ice in which graphics, music, skating and acrobatics come together to create a colorful, emotionally rich universe. Follow Axel, a young musician with a passion for illustration, as he leads you into his vivid imaginary world. In this epic fantasy, graphic art and music intertwine to create the supercharged world of AXEL. Ice skating extravaganza, impressive aerial feats, pop music and vibrant visuals create an energetic and immersive experience for the whole family.

Directed by Patricia Ruel and written by Fernand Rainville, Axel is inspired by his first love, the mysterious Lei. She turns his world upside down, creating an unreal space for him where she will be his heroine. As the leader of a band of rebellious youngsters, The Syndicates, Lei is the keeper of a precious talisman. Giving strength and courage to whoever possesses its light, the Shining Star is coveted by Vi, a supervillain supported by his gang, The Corporation. Vi is focused on just one goal: stealing the legendary talisman’s light! In this epic fantasy, Axel will realize that love is the source of the light that will give him the courage and strength he needs to overcome any obstacle and make his dreams come true.

The creative team drew inspiration from the energy and excitement of arena concerts and sports events to create an electro-pop circus show on ice. In this newest Cirque du Soleil creation, AXEL brings a new look to the world of ice skating by introducing us to the discipline of freestyle skating. This fresh take on skating, combined with the skill and power of traditional pairs, solo and adagio work, allows Cirque du Soleil to set the stage for high caliber ice skating of all kinds.

Cirque du Soleil AXEL will be at Findlay Toyota Center for four shows only, Thursday, March 19 through Saturday, March 21. For more information on the schedule and for tickets, visit cirquedusoleil.com/axel or FindlayToyotaCenter.com. QCBN

Donna Werking is the owner of Northern AZ Social, a Prescott digital marketing agency. Contact her at 928-710-7910 or NorthernAZsocial@gmail.com. 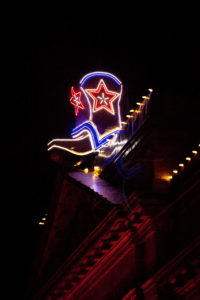 A six-foot illuminated Cowboy Boot will be dropped from The Palace Building’s Flagpole in downtown Prescott, Arizona.

On New Year’s Eve, Saturday, Dec. 31, 2019, from 8 p.m. to 12:30 a.m., the Historic Whiskey Row in downtown Prescott will be the site for the 9th Annual Whiskey Row Boot Drop, presented by Findlay Auto Group Prescott. The event is free to the public, with no admission tickets or passes required for entry. The six-foot illuminated cowboy boot will be slowly lowered down from a 40-foot flagpole from the old historic Palace Building. This year, the boot has been updated with new lights for our crowd’s enjoyment. The last nine years have drawn thousands of people of all ages. Much like the tradition in New York’s Times Square, where a large ball has dropped annually since 1907, the Whiskey Row Boot Drop event has become a Prescott tradition.

There will be a DJ from Magic 99.1 FM spinning tunes, local food vendors, fire dancers, promotional giveaways and more throughout the night. “With the great success of the last eight years, we’re excited to continue this great tradition for folks in the Prescott area and visitors alike. We will continue to have two drops: one at 10 p.m., and the second at midnight. Both drops include fireworks that will ignite off the top of the parking garage behind Whiskey Row. The early drop will coincide with the traditional ‘Ball Drop’ back east as well as letting the folks who turn in early celebrate the New Year,” said Event Organizer Matt Brassard, owner of M & M Entertainment.

“The event was conceptualized in 2009 to encourage travel and tourism to help increase Prescott’s bed tax dollars during the slower season. I’m thrilled to have been a part of bringing the holiday tradition to Prescott, Arizona,” stated Donna Werking, co-founder and owner of Northern AZ Social, LLC, “We are especially thrilled to be working with Findlay Auto Group of Prescott. Their community support has been tremendous in keeping this event alive for now its 9th year!”

The Boot was created five years ago by Stephan Markov of Morgan Signs and is truly a one-of-a-kind piece of art. It is entirely decorated with LED lights that come into play as the clock counts down. This year, the boot has been updated with new lights to keep the event’s signature showpiece exciting for the Boot Drop attendees.

Donna Werking is the owner of Northern AZ Social, a Prescott digital marketing agency. Contact her: 928-710-7910 or NorthernAZsocial@gmail.com. 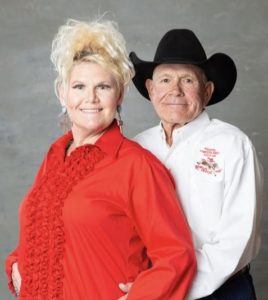 He is well respected and well known in the professional rodeo industry. He continues to serve on committees and engages with the Professional Rodeo Cowboys Association (PRCA) and other rodeo committees around the United States. Trujillo is passionate about preserving the sport of rodeo and also about keeping the western traditions alive at the World’s Oldest Rodeo.

Now, the general manager of the renowned Prescott Frontier Days, Trujillo is married to his wife, Margo, has two daughters and six grandchildren, including two grandsons, who compete in high school rodeos. Perhaps the best descriptors for Trujillo are that he has a captivating megawatt smile, loves to laugh and firmly believes that a positive attitude will win competitions.

Trujillo has led the non-profit organization, the Prescott Frontier Days, Inc., for the past 16 years and has seen an increase in sponsorships, record attendance, booming ticket sales and a rodeo title that is coveted by professional cowboys and cowgirls around the country. The World’s Oldest Rodeo is known as a nostalgic, traditional and competitive rodeo by rodeo fans, sponsors, contestants and the community. With his leadership, knowledge of professional rodeo and his passion to preserve the traditions that make the Rodeo unique, the World’s Oldest Rodeo is one of the top best 40 rodeos in the United States.

Preparations have already begun for the 133rd World’s Oldest Rodeo that takes place at the Prescott Rodeo Grounds from June 29 through July 5, 2020. Tickets go on sale in mid-December and can be purchased online at worldsoldestrodeo.com.

When Trujillo is not working, he is a very dedicated family man and he and Margo spend time with their two daughters and six grandchildren. Competitive rodeo runs in the family as two of their grandsons are competing in high school and now professional rodeo. Trujillo is a mentor to both of his grandsons and is not afraid to teach them what he knows about rodeo, life and being a stand-up man in today’s world.

Helping others is not foreign to Trujillo as he has hosted a boy’s hunting camp at his home near Steamboat Springs, Colorado. He is a giving, loyal mentor to many and is always willing to lend a bit of advice, either rodeo related or life in general. He is a well-respected husband, father, grandfather, rodeo legend and now hopefully a champion dancer!

This year, Trujillo is entering another competition, the local Dancing for the Stars event to help raise money for kids in Yavapai County and will be on the stage performing on April 18. The event is held at the historic Prescott Elks Theater on April 18, 2020, with two performances (a matinee and one evening show).

“I am honored to be included and considered for the Dancing for the Stars event. I believe in the organization and have attended the event. I am looking forward to putting ‘my best foot forward’ and appreciate the community’s support,” Trujillo said.

Your support, vote and donation are much appreciated! Help Trujillo be a success for the Boys and Girls Clubs of Central Arizona by clicking visiting WorldsOldestRodeo.com/Vote-JC to donate, vote or sponsor Trujillo, and please share on your social media channels. Thank you in advance for your support of this great event, great organization and great community leader! QCBN 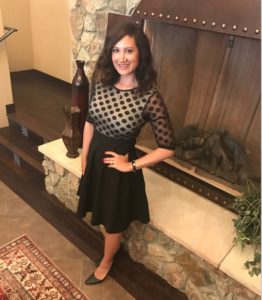 Prescott leads travel and tourism during Travel Rally Day in support of the many ways travel contributes to the community.

The event was part of the 36th annual National Travel and Tourism Week (NTTW), which unites communities across the country to celebrate how travel matters to American jobs, economic growth and personal well-being.

The theme of this year’s NTTW, “Travel Matters,” highlights the innumerable ways in which travel makes up the fabric of Prescott’s culture and economy. Each day of NTTW will celebrate a different facet of travel: the economy, new experiences, jobs, infrastructure, health benefits, hometown pride and how travel strengthens families.

“Travel supports one in nine American jobs and tourism has a direct impact right here in Prescott, Arizona. We will hold an open house on Tuesday, May 7, from 2-4 p.m., at City Hall for all the tourism stakeholders. All tourism stakeholders and their staffs are invited. The Tourism Office will also conduct visits that week to our stakeholders,” said City of Prescott’s Community Outreach Manager John Heiney.

“In every pocket of America – from the largest cities to the smallest towns – travel matters,” said U.S. Travel Association President and CEO Roger Dow. “I, like so many others, got my start in the travel industry, and it shaped my life in ways I could have never imagined. This National Travel and Tourism Week, we’re celebrating how travel powers our economies, strengthens our communities and changes our lives.”

From small businesses to large industries, travel employs a diverse workforce in Prescott. The facts are:

Jobs are supported by travel and tourism.

This is an important part of travel’s economic importance nationwide.

“I have seen firsthand how much travel matters to our community,” said Margo Christensen with the Ponderosa Hotel Management Group. “We continue to see increases in occupancy and Transient Occupancy Tax (bed tax) collections and the Chamber of Commerce Visitor Center receives a steady flow of visitors every day from around the world. I’m proud of Prescott, and eager to welcome even more visitors here to show them why we love Prescott, Arizona so much.”

Heiney added, “Bed tax collections are approaching $1 million this year. This year alone, about 60 percent of collections are going directly back into the community in the form of special event grants to non-profits, and public improvements to trails, parks and open space.”

Donna Werking is the owner of Northern AZ Social, a Prescott digital marketing agency. Contact her: 928-710-7910 or NorthernAZsocial@gmail.com.