You are here: Home / Archives for residence hall 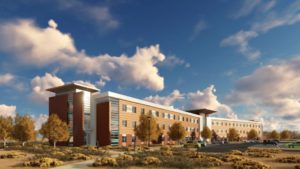 Another $20 million construction project is underway at Embry-Riddle Aeronautical University in Prescott. It is the third multi-million dollar building to go up since 2014.

This time, it is a residence hall.

Chancellor Frank Ayers told QCBN, “Embry-Riddle’s commitment to its students, faculty, staff and the community has included more than $70 million in construction the last three years. That includes this new residence hall. Only last month, we dedicated the just-completed STEM Center. Our combination of STEM degrees that lead to prestigious and high-paying careers resonates with our students and their parents. The care and concern of ERAU is noticed by all of them. We are proud, too, of the amazing partnership between the City of Prescott and our national university.”

The new building is a 70,800-square-foot, three-story residence hall that will accommodate 280 students in 48 apartments and suites. “Given that just this fall, our enrollment increased about nine percent, we’re approaching 2,700 students,” said Ayers. “It’s worth noting that our student enrollment has gone up by more than 1,000 students in just the past five years.”

ERAU Chief Business Officer David Hall said, “We found it absolutely necessary to build another residence hall to accommodate demand from students wanting to live on campus. This is a factor of our recent enrollment growth.”

The new structure will be visible from Willow Creek Road on the southwest edge of the campus.

Site preparation began two weeks ago under the supervision of Earth Resources Corporation, a company based in Dewey, which will oversee the site preparation and install the infrastructure – sewer, water, gas and electric.

The architectural firm is PQH, which has its headquarters in Jacksonville, Florida. It has designed projects throughout the southeast and across the nation.

Sundt Construction, with the main office in Tempe, and others in Tucson and California, is the general contractor. It is the same company that built the $22.5 million STEM Education Center and Jim and Linda Lee Planetarium.

Kelley/Wise, a firm headquartered in Prescott is serving as the civil engineer.

Construction is to be complete by mid-August, before the fall semester begins, Hall said.

Facilities Will Be Contemporary

Unlike the old-fashioned college dormitories of a couple of generations ago, residence halls are designed for comfortable adult living with some special features.

Among them are these:

The two-bedroom semi-suites will have small kitchenettes with a sink, small refrigerator and microwave oven.

The external appearance of the new structure will be similar to the residence hall just opened last year. However, less brick and more steel will be used for the exterior siding.

A large paved parking lot to accommodate the residents’ vehicles will be in front of the building.

Hall explained that primary occupants in the residence hall will be traditional incoming freshmen. Even so, he said, the continuing enrollment increases will make it likely that freshmen will also live in other campus residence halls.

Construction costs are paid for through bond issues, which are intended for capital construction. Ultimately, the actual cost is paid for through student occupants of the residence hall. That includes depreciation and debt service as well as maintenance, utilities and insurance. QCBN

#1        This architect’s rendering is a of the $20 million residence hall currently under construction at Embry-Riddle Aeronautical University. It is scheduled to be completed and open for occupancy in mid-August 2018.