You are here: Home / Archives for soccer 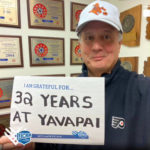 Pantalione was hired in 1988 by then YC Athletic Director Lynn Merritt. He was at the University of Montana, where he earned his degree. Prior to that, Pantalione had been coaching and directing soccer programs in England and then the University of Wisconsin-Green Bay, Kenyon College in Ohio, Jesuit … END_OF_DOCUMENT_TOKEN_TO_BE_REPLACED