You are here: Home / Archives for Travis Smith 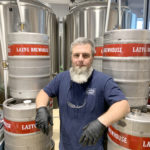 Travis Smith almost let his dream of making beer professionally go down the drain. But he permanently abandoned a law enforcement career in a move that ended up eventually helping him earn recognition as one of the top brewmasters in the nation. In 2019, Smith became became brewmaster of … END_OF_DOCUMENT_TOKEN_TO_BE_REPLACED