You are here: Home / Business / Taking the Next Brave Step 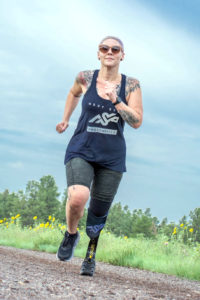 For more than two years, Alexandra Wolf, a popular Flagstaff hairdresser, had been wondering why her left leg hurt so much.

“Sarcomas are extremely rare cancers, making up less than 1% of cancer in adults,” Wolf explained. “They are hard to catch and diagnose. Being diagnosed with my type of cancer was extremely scary because we see and hear so much about cancer so often in our daily lives, but no one I knew had heard of my type of cancer. I had only ever heard of the regular carcinoma cancers people usually get. It was a huge fear of the unknown.”

She learned that sarcomas can grow anywhere in the body, and leiomyosarcoma starts in an involuntary muscle.

As a wife, a mother and a daughter, the young woman had many important reasons to be motivated to wage a furious fight with her cancer.

Wolf was raised in Tucson and moved to Flagstaff when she was 21.

“Shortly after I moved up here, I met Jacob Wolf,” she recalled. “We pretty quickly got married and started a family.”

“My parents decided to move up here after I had my son,” she said. “I still have lots of family in Tucson, including my younger brother and my niece.”

Prior to her diagnosis, her little family, including their dogs and her parents, had been enjoying a healthy and happy lifestyle, which included regular hikes on mountain trails and climbing rocks and trees.

Her current passion, running, was not part of her exercise regimen.

“I actually never wanted to run before my operation,” Wolf said. “I was always very active and [spent time] outdoors, but never running. I did yoga and took other classes (like aerial silks) to keep active.”

The summer of her diagnosis, the family focus shifted to a rapid scramble to find medical solutions.

After first consulting with Dr. James Warneke, a sarcoma specialist at the University of Arizona, Wolf came back to Flagstaff and sought help from Dr. Peter Mathern at Arizona Oncology.

“They had both treated this type of cancer almost the same number of times,” she said. “I chose to get my treatment where I lived so I could be close to my family. Dr. Mathern and his staff all took care of me the best they could. I had some complications from treatment and ended up in the ER a couple times, but those things are common for the type of chemotherapy I was receiving.”

Initially, she had chemo treatments once a week for three months starting in July 2019, but the tumor did not respond.

“The amputation was necessary because the chemo didn’t shrink my tumor,” Wolf said. “The tumor was 11.8 cm when my leg was amputated, and the tumor was less than a millimeter from getting into my bone marrow. We had to get rid of it before it was able to spread.”

Chemo treatments after the amputation were “much more intense,” she said, and included five more rounds, four days a week each, from November 2019 to February 2020, including wearing a pump at home to administer chemo through the night.

“I have so many great relationships with my friends and clients that I had many people trying to visit me in the chemo room while I got treatment,” Wolf said. “They had to limit how many people were allowed in at a time. Friends, family and even people I didn’t know brought gifts and treats for me and the other people receiving treatment. It made me feel really supported and cared for when I needed it the most.”

She had another surprise, and not a pleasant one, when her treatment finished.

“When I was done, the timing was very interesting because I was declared cancer-free Feb. 28, 2020, and March is when the pandemic really hit. I had been trapped at home and in doctors’ offices for almost a year, and I was ready to be free. The world had other ideas.”

The pandemic has been just one of the twists and turns in the road back to recovery for Wolf. Along the way, she decided to try to reach and even surpass the level of exercise she had previously enjoyed.

“My goal was to get back to that, but everything changed when I was told I could apply for a grant to get a running blade.”

The grant application, which was ultimately successful, included letters from her doctors and physical therapists explaining why she was a good candidate for a blade. Wolf also had to write about why she thought she was someone who deserved and could use a blade.

“I felt like this was my only opportunity to have one because any prosthetic equipment is extremely expensive,” she said.

Today, she trains and competes with a custom-built Ossur Flex-Foot Cheetah blade that enabled her to run in her first 5K race on Aug. 13, 2020, a Sarcoma Strong Virtual Run/Walk fundraising event.

The state-of-the-art blade is the same one made famous by Oscar Pistorius in the Paralympics and Olympics.

“One of the best parts about being a hairdresser is all of the amazing people I get to meet,” Wolf said. “One of my clients, Kerstin May, got me in contact with a Paralympic cyclist who told me about the Challenged Athletes Foundation.”

May told her the Paralympic cyclist, her friend Todd Key, “is very well known down in the Valley for his speed and also functions with prosthetics. He was intrigued to hear about Alexandra’s journey through fighting cancer and how she has coped with the amputation of her leg.”

Since receiving her running blade, she has been working with Mike Kayser, owner of Next Step Prosthetics in Flagstaff, to rework her blade so it is the right fit for her body.

“Having the blade even slightly off can seriously affect my running and injure me,” she said. “I have to be extremely careful not to fall and hurt myself. I’ve done lots of physical therapy and still continue to go to learn how to use my equipment better. It’s also beneficial to be extremely active and build strength because I use about 25% more body energy just to move, due to the limb loss.”

Her parents, husband and kids have all helped her train for races.

“We have been running at Buffalo Park because I like trail running, but it’s mostly flat,” she said. “Because I’m still really new on my blade and still building muscle and endurance, I am running intervals just a few minutes at a time. Every time I go out, I try to push myself a little bit harder than last time. It always feels good to accomplish more than I could yesterday.”

That spirit of striving has also been reflected in her personal training sessions.

She has been working diligently for about six months on overall strength and conditioning training with Erin McDonald, a personal trainer in town.

“She learned to walk, to jog, then run,” McDonald said. “Then got a blade and booked a 5K. This person is a real life superhero. And she lets me train her.”

The trainer said there is nothing her client can’t do.

“She has been resilient from day one,” she said. “She has the attitude of a warrior: stubborn, steadfast and strong as hell, but with a great sense of humor so it doesn’t come off aggressive ever. She is constantly in a state of ‘Can do.’ I’ve honestly never experienced anyone like her. She just dominated her recovery and keeps going.”

Wolf’s battle with cancer also has been a financial challenge.

For one thing, her hairdressing business took a heavy hit.

“I enjoy doing hair so much, and I had owned a salon with a partner, Lanyap Salon, for a about year when I was diagnosed with cancer,” she said. “I didn’t know what was going happen to my family because I was the sole breadwinner in my house, as my husband is a stay-at-home dad. Unfortunately, we ended up closing it, but it turned out for the best. I think going through chemotherapy while worried about my business would’ve been much harder.”

The Flagstaff community, her friends, family and clients – “everyone came together to support me,” Wolf said. “R2 studios, owned by my friends Robin and Renee, held a fundraiser for me. Multiple locally owned business owners donated so many things to be auctioned off for me, and Satchmo‘s donated all of the food. My best friend since childhood, Ginnene [Iman], started a GoFundMe [account] and we raised enough money to be able to pay all of our bills.”

Wolf learned that adaptive equipment is expensive and that she needed a different tool for each activity.

“I need a different leg for running, swimming, climbing, etc., and that can add up pretty quickly. It is possible to figure out how to do these activities without the specialized equipment, but it’s extremely hard and can be damaging to your equipment and your body.”

Currently, Wolf works in a small studio where she rents a chair from another hairdresser.

“Alexandra is an amazingly talented hairdresser and hair designer and listens closely to people’s concerns. In my case, the stress from COVID caused my hair to thin like crazy,” May said.

In addition to hairdressing, Wolf is also devoted to her work with Next Step Prosthetics and has started a support group for amputees in Flagstaff.

“Alexandra is, in a way, still at the beginning of her journey, but already is advocating for others and becoming a positive role model,” May added.

“I talk very openly to as many people as I can,” said Wolf. “I have online friends with similar stories, and we support each other. I love talking to kids about my amputation and even showing them (with parent consent) to help them understand and be less afraid.”

The lessons have been many in her fight back to good health, but one lesson stands out.

“The main lesson I’ve learned is balance,” she observed. “I always want to do so much and be everywhere at the same time. I’ve learned to say ‘No’ and give boundaries when I need to take care of myself. I appreciate everything so much more than I did before. Being stuck in a bed and a wheelchair for a year and a half changes the way you see life.” QCBN