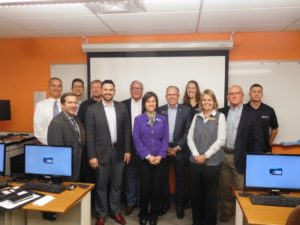 With visions of economically beneficial alliances to foster opportunities for existing businesses to compete in global markets, two organizations are cooperating to create a powerful interrelationship that will stimulate unprecedented economic development.

AITA is headquartered in Scottsdale. NATA is based in Prescott.

The purpose, Hernandez said, was to discuss strengthening the relationship among all involved.

During a presentation, Bolel said, “AITA is the premier resource for companies and organizations in Arizona and Israel on collaborative initiatives. AITA is dedicated to promoting and strengthening business, investments and entrepreneurship, technology and trade relations with Israel.”

He added that AITA is particularly interested in Arizona because of its proximity to three of the world’s largest economies: Mexico, California and Texas. He said Arizona has an advantage in its aerospace and defense installations, cybersecurity emphases, biosciences and health care, and aggrotech programs.

“Such programs appeal to Israeli venture capitalists,” he said. He then noted that more than 42 Israeli-based companies have come to Arizona for business. He also said Israel is home to more NASDAQ companies than any other countries except the U.S. and China. He explained that NASDAQ is the world’s largest electronic stock exchange, founded in 1971.

He noted that per capita, Israel has more technology professionals, scientists and venture capitalists than any other country. “Israel is becoming a technology hub that has serious impact around the world.”

Bolel said Arizona’s cost of living appeals to people in Israel. “You also have 1,400 companies involved in aerospace, serious research and application of cyberspace activity, a solid higher education system and many market opportunities that are constantly evolving.”

He noted that Eviation, an Israeli-owned electric aircraft manufacturing firm, already had selected Prescott as its U.S. headquarters.

Robb also commented that Prescott faces the challenge of losing young people to other cities with more opportunities for them. “We can change that and we can create high-paying jobs that keep these talented people in the Quad Cities area.”

Hernandez concluded the meeting by urging those present to continue seeking venture capital to support technology growth. “We have the education faculty and facilities and committed personnel who can meet such needs. We have the potential in Prescott to become a technology leader in Arizona.” QCBN