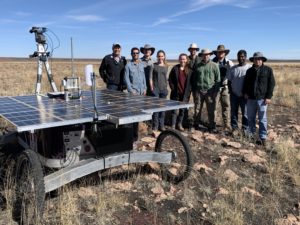 Next generation rovers will be able to learn, decide, think.

Scientists like David Wettergreen and Eldar Noe Dobrea are making robots smarter. Zoë (a Greek word that means “life”) is a planetary rover prototype. As expected with next generations, she and future rover robots will be more intelligent than their predecessors who have journeyed to Mars.

On Babbitt Ranches north of Flagstaff, scientists, engineers and geologists have been testing instruments on Zoë that are enabling her to make decisions, explore rocks that catch her attention and actually learn from past information. Essentially, Zoë is becoming more like robots in science fiction movies.

“When we see Hollywood movies, we actually see a rover that gets sent out to explore and once in a while reports to the team and says, ‘Hey guys, I’m up here and I discovered this,’” said Noe Dobrea, senior scientist at the Planetary Science Institute. “In reality, that’s not how rovers work on other planets. Right now, we are basically joy-sticking rovers. We tell them, ‘OK, we want you to move 10 feet forward.’ It moves 10 feet forward. On the next uplink or the next day, we tell it, ‘OK, that rock is interesting. Rover, we want you to move two meters to that rock.’ The next uplink, we tell it, ‘Rover, we want you to extend your arm and place this instrument on that rock.’ And this goes on and on. Every single action of the rover is commanded from Earth.”

Mars rover “Opportunity,” for example, conducted science for 17 years on Mars and accomplished what could have been done by humans in two weeks, says Noe Dobrea. “Plus, additional discoveries could have been made if the rover was smarter because, as human beings walk around, they are seeing different things that are of interest. The rover doesn’t.”

But that is about to change with software developed by Carnegie Mellon University and the U.S. Geological Survey with funding provided by NASA. “We’re trying to advance now to the point where the robot explores on its own, so it decides where to go based on what it’s seeing and based on the geology of the site,” said David Wettergreen, Zoë’s creator, of Carnegie Mellon. “We have machine intelligence software that learns from prior examples that can interpret that data and determine what kind of rock it’s looking at, so [identifying] the mineralogy of the different rocks.”

Zoë’s primary instrument is the near infrared spectrometer, which measures wavelengths of minerals. “It’s like having thousands of pixels, each measuring a different color all the way out into the infrared,” said Wettergreen.

“Our eyes see three colors: red, green and blue,” said Planetary Science Institute Lab Technician Neil Pearson. “With this instrument, we can see a lot more colors and it gives us a lot more information about the mineralogy that we’re seeing in rocks – how different elements are bonded with them. That tells us how they are formed and processes that they’ve been through.”

For example, on Babbitt Ranches, the spectrometer is telling scientists that there’s a lot of limestone and dolomite. “That’s calcium carbonate and magnesium carbonate and so it was basically an ancient shallow sea, probably warmer at one period where you a had a lot of evaporation. And then more recently, we had lava flows cover it.”

“Some of the instruments are capable of detecting water, which is a component of rocks that were formed in the presence of water,” said Noe Dobrea. “You can actually identify water and you can identify what kind of minerals or types or rocks the water is trapped in. We can tell the rover we would like to find the places where we have these types of minerals because this may be where we can find life or evidence for past life.”

A laser scanner on Zoë calculates the distance to points in the field. “It kind of works like a smart bumper on your car that warns you when you get too close to things,” said Wettergreen.

“As the rover drives, it takes measurement after measurement and builds a three-dimensional model of the topography. That’s what it can use to navigate autonomously.”

Babbitt Ranches President and General Manager Billy Cordasco thanked the scientists for the work they are doing and compared their pioneering spirit with the early groups of American settlers from England. “In 1639, you have Ed Babbitt in England hopping on a little boat like the Mayflower crossing the Atlantic to the New World with a few instruments and the stars. And today, almost 400 years later, here we are in front of this rover that is learning how to explore other planets. It’s just so inspiring to be with these folks who have the same ‘Go West’ kind of attitude as Ed did so long ago!”

“We are very grateful to Babbitt Ranches for making it so easy for us to access this site to drive our rover around and perform our investigations,” said Noe Dobrea. “It’s been quite an honor and this kind of work is incredible – it’s a childhood dream.” QCBN