You are here: Home / Community Profile / Top Brewmaster Concocting Winning Craft Beers for Prescott and Beyond 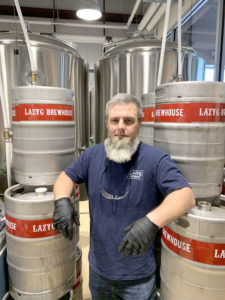 But he permanently abandoned a law enforcement career in a move that ended up eventually helping him earn recognition as one of the top brewmasters in the nation.

In 2019, Smith became became brewmaster of Prescott’s LazyG Brewhouse ahead of its grand opening in August. He quickly went to work in a brew pub that offers customers a broad range of styles, from original IPAs to lighter, crisper beers.

LazyG sits along the Granite Creek and is located just south of Whiskey Row at 220 W. Leroux St., in Prescott.

“I had an idea about the first few batches,” Smith said. “But what I’m going to make – I’m still figuring out. I’m still brewing new beers, trying to see what’s going to be best for the pub.”

Smith, 40, has put his stamp on craft beer in the region. Smith has worked at Santa Rosa’s Russian River Brewing Company and The Bruery, a brewing company based in Placentia, California.

In 2012, he co-founded San Diego’s Societe Brewing, which has won medals in national and international beer competitions. Smith has also worked as a professional beer judge at competitions such as the Great American Beer Festival.

The California native pays attention to detail and goes through a fermentation process that starts with cracking grain in a mill and ends with gathering the waste products from yeast that eventually become alcohol.

Smith said he is proud of Six-Hour Drive IPA and Doolin’s Dry Stout, which was named after the dog of pub owners Jim and Jean-Marie Bellington.

“I just think they are very well done,” Smith said. “[They] are exactly the way that I would want them.”

Owner Jim Bellington points to the brewmaster’s precision as a key to great beer. He said Smith doesn’t skip steps anywhere – from the sanitation process of the tanks to making sure mash rests at specific temperatures to activate naturally occurring enzymes in the malt.

“We don’t want to do anything to compromise that,” Bellington said. “… Travis is extremely good at what he does. The processes he uses consistently help produce consistently great beer.”

LazyG has its beer featured locally at Park Plaza Liquor & Deli as well as the Barley Hound. The brewpub’s beer is on tap in the Valley at OHSO in Paradise Valley and at Boulders on Broadway in Tempe.

So far, Six-hour Drive, Sunshine Blonde and HazyG are among the favorite beer types of customers, according to Smith.

Smith said the beer-making process is similar to a chef methodically mixing ingredients in a kitchen.

The brewmaster knows how important it is to understand the different malts and the flavors they produce. On one occasion, he had to get rid of thousands of dollars worth of beer – a costly mistake he doesn’t want to repeat.

“One of them was almost $8,000,” Smith said. “It’s not worth it to tarnish the reputation to serve an inadequate product.”

Bellington thinks his brewmaster is one of the main ingredients that keep customers flowing through the restaurant doors. He said it was of “good fortune” that Smith responded to an employment ad and moved to Prescott with his family before taking the job in May.

The owner came from a 45-year career in the golf industry before opening up the brewpub. He and his wife purchased the property in 2007 and eventually converted it from a trailer park last year.

He said elements of the golf industry aren’t all that different from the goals they are trying to accomplish at their local restaurant.

“We’ve got customers that we are servicing,” Bellington said. “It’s all about giving them a good experience. It’s no different on a golf course. You need to have the golf course prepared, the staff ready and welcome them when they show up and make sure they have a good time while they are there.”

Smith said it’s fair to compare him to a “mad scientist” of sorts when you look at his precision and methodology.

He said he will continue to use the center’s four fermenters to make quality craft beer to help customers keep coming back.