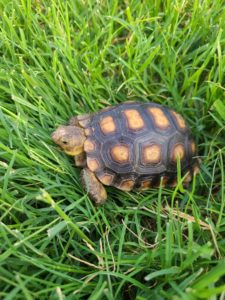 Courtney Sheldon had always wanted a pet tortoise. When she was 9 years old, her family would help take care of a dog kennel when the owner was away. She spent her time at the pond out back, playing with the turtles.

When she moved to Arizona in 2020, she mentioned to her boyfriend that they should get a tortoise. After all, the climate was right. She was half joking – they already had three dogs and five cats. But the idea stuck with her. Then one day on Facebook, she saw an article about how the Arizona Game and Fish Department had confiscated dozens of desert tortoises from someone who had been breeding them illegally and how these tortoises needed homes.

Tegan Wolf, the desert tortoise adoption program coordinator for the Arizona Game and Fish Department (AZGFD), explained that her office is responsible for rehoming desert tortoises all throughout the state. They usually adopt out 300 to 400 tortoises every year during adoption season, which runs from April through September. There is also a second state-sanctioned tortoise adoption facility at the Arizona-Sonora Desert Museum, but all of the applications are received and screened through the main facility in Phoenix. These facilities only take in captive desert tortoises, which can’t be released to the wild because they may not be able to properly seek out food and because they run the risk of transmitting diseases to the wild population.

“Lately, we’ve seen a lot coming in from illegal breeding,” she said. “People just don’t realize that when you put a male and a female together, they’re going to breed. We had a case earlier this year where somebody had 65 of them in one home. We also get tortoises from people moving out of state because it is illegal to take them across state lines, or people who have been taking care of a tortoise for 30 or 40 years and can’t take care of it anymore.”

There’s a lot to consider when adopting out a tortoise. For example, a female can still produce viable eggs even if she has been away from a male for a few years, so people accepting female tortoises are instructed to contact AZGFD if they observe egg laying.

Often, tortoises are also very territorial, so the office usually only adopts out one per household. “They tend to fight,” Wolf said. “In the wild, [each tortoise’s] range is about a mile. They’ll bite each other’s legs or heads, flip each other over, shove each other in a corner. They can be brutal to other tortoises.”

That means Tegan works closely with each applicant to make sure they have an area that will be perfect for their new pet. The department also provides guidelines about what to feed tortoises, how to manage their brumation, or hibernation season, and more.

Wolf’s job has plenty of rewarding moments. Once, they took in a tortoise whose shell had been damaged and improperly fixed. Someone had tried to patch the hole using plastic epoxy. As a result, the tissue underneath the patch job started rotting away.

“We called him Winnebago, because he had all those bugs just hitching a ride with him,” she said. “We were really worried about finding the perfect home for him. We finally found somebody who built the biggest, prettiest, most amazing enclosure for him, so that’s where he went. He’s a happy tortoise.”

When Sheldon applied to take in a tortoise, she submitted photos of the area where she planned to keep it, and Wolf made recommendations to help her to get the habitat tortoise-ready. In May, Sheldon picked up a 0.74-ounce little friend, a Sonoran Desert Tortoise, whom she named Taco.

“He’s great. I’m obsessed,” she said. “It’s ridiculous how much personality these little animals have.”

Desert tortoises live to be 80+ years old in the wild, so part of Wolf’s job is making sure potential adopters have plans in place for whom they will pass their tortoise down to. Sheldon said that won’t be a problem. Her kids are already playfully arguing about who will inherit him one day (Sheldon is only in her 30s). Wolf has become active in online tortoise forums and has already ordered a birthday costume on Etsy for Taco’s first birthday.

Sheldon said the fact that Taco doesn’t require a great deal of care has been helpful to her mental health. He’s a companion who delivers cuteness and sass without demanding much. But she’s always finding new ways to spoil him. He has little plastic dinosaurs to hang out with and knock over in his habitat, a waterproof pad to roam around in on the house and a personal pool made from a paint pan.

Under her care, he’s grown to 4.48 ounces, more than six times the size he was when she first got him.

“I like to take him to this little grass field behind my yard. He’ll get on top of the grass and he just walks around – it’s like he’s going on this big adventure,” she said. “I’m glad to be a part of the tortoise community.” QCBN

For more information, contact the Arizona Game and Fish Department Tortoise Adoption Program at azgfd.com/wildlife/nongamemanagement/tortoise/captivecare/, 844-896-5730 or TAP@azgfd.gov. Or, contact the Desert Museum program at desertmuseum.org/programs/tap or 520-883-3062. Follow Taco the tortoise’s adventures on his adorable Instagram page, @tortietaco.