You are here: Home / Local News / Tourism Taking Off with Prescott Fly-In 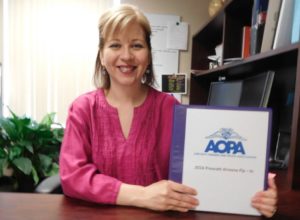 If the record-breaking registration for the Aircraft Owners and Pilots Association (AOPA) event is any indication, the Sept. 30-Oct. 1 “Fly-In” at the Prescott Municipal Airport is going to be a mega-event for the area.

As many as 4,000 people are expected to participate in the weekend of flying, food and fun, according to Dave Roy, the Prescott-based AOPA Fly-In event chair. Roy is the director of Safety and Communications for Guidance Aviation headquartered in Prescott.

Every year, the AOPA sponsors Fly-Ins around the country. This fall, Prescott was selected for the fourth and final Fly-In of 2016. Previous events this year have occurred in Beaufort, North Carolina; Bremerton, Washington; and Battle Creek, Michigan.

The AOPA is the world’s largest, and considered the most influential, general aviation association. The economic impact is anticipated to be in the hundreds of thousands of dollars in the Quad Cities area. Embry-Riddle Aeronautical University alumni director Michelle Day, who serves on the Prescott AOPA committee, says the estimated amount is approaching $750,000.

Day credits Roy and City of Prescott Airport Manager Jon Cox for being diligent and thorough in completing necessary paperwork and other details to make the fly-in possible.

“The event will have positive effects for years, especially among pilots and their passengers looking for unique places to visit,” City of Prescott Tourism Director Don Prince.

“I know from even my limited experience with AOPA Fly-Ins that communities throughout the country compete seriously to bring them to town,” said Day. “Fly-Ins provide great visibility and exposure to a community – and they bring a lot of ‘fresh’ money.”

Prescott and the Quad Cities will also receive news media exposure from the monthly AOPA magazine.

“This Fly-In will put Prescott on the map for the rest of the country,” said Prescott Chamber of Commerce CEO Dave Maurer. “It also will demonstrate that this community is among the best in the nation for this kind of event.”

Margo Christensen, an active member of the Prescott Tourism Advisory Committee, said, “Ever since the state centennial BestFest and our own Prescott Centennial celebration, the business community and city leadership have become experts at coordinating mega-events such as this. It’s rewarding to be a part of a planning process that executes these types of events, which bring new money and new people to our unique area.”

Hotels and motels throughout the region are being booked. Many are giving special AOPA discount rates and complimentary van shuttle services to and from the airport to hotels, including Quality Inn and Springhill Suites.

Rental car dealers are also giving similar discounts. Fly-U Shuttle is designating luxury vans and drivers to provide exclusive service to those arriving at Ernest A. Love Field, located on the northeast edge of Prescott.

Day says planners began organizing for the Fly-In right after the first of the year, when Chris Eads, AOPA’s director of Outreach and Events, brought several AOPA team members from the Frederick, Maryland, headquarters to Prescott to meet with ERAU, city officials, community leaders, airport personnel, representatives from local groups and individuals interested in aviation.

Though some pilots and their friends may arrive before Sept. 30, the formal event schedule does not begin until 6:30 p.m. with a Barnstormer’s Party, including food and entertainment. Reservations are recommended for all scheduled activities.

ERAU has scheduled its annual Homecoming “OctoberWest” the same weekend. In conjunction with the Fly-In, the university is sponsoring an aerial demonstration at the airport. It will feature performances by ERAU alumni Melissa Andrzejewski, Bill Stein and Skip Stewart.

“I think that the AOPA Fly-In, held in conjunction with ERAU’s annual alumni events, will be a great event for the greater Prescott area,” said City of Prescott Mayor Harry Oberg. “I hope this will be a prelude to re-establishing the Prescott Air Show that was cancelled about 10 years ago, for it was highly popular with local resident and tourists.” QCBN