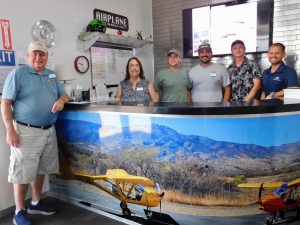 As Prescott and the nation feel the impact of the pilot shortage, about 50 pilots a year are earning their pilot licenses through training by Leighnor Aircraft.

Owner Lance Leighnor says the pilot shortage has meant that his family business has been very busy with training and plane rentals for the last two years. As a result, Leighnor Aircraft has increased from two to 15 planes in Prescott and has two planes in Cottonwood.

“The demand has gone crazy,” he said about the increased interest.

One of the causes for the shortage, he says, is that the federal government mandates that pilots retire when they reach 65.

Leighnor said some of his clients are interested in becoming professional pilots, while others want to fly for fun. Teenagers can start training when they turn 16. It takes about two years to earn a professional pilot’s license.

“It’s a big problem,” he said about the pilot shortage, as he pointed to national news that flights are canceled every day, with hundreds of flights canceled on July 4. He noted that one airline recently pulled out of Flagstaff because of a lack of pilots. Skywest canceled flights to 30 essential air service cities. Flights to essential air service cities receive federal funds. Airlines gave up “free money,” he says, because of the lack of flight crews.

“That’s how bad it is,” said Leighnor. “This is a 10-year problem. This is not going to get fixed next year. The only reason we have survived the pilot pipeline problem was because of Embry-Riddle.”

He says before the pandemic, the airlines knew pilots would soon be aging out of the profession, but the pandemic made the situation worse with decreased air travel and the resulting furlough of pilots.

“These pilots are not coming back,” he said. “The travel restrictions have eased and we’re almost back to pre-pandemic levels, but we don’t have the pilots.”

He believes the mandatory retirement age needs to be revisited. “Age 65 is a bit low. We need to look at people’s medical conditions. There are some 40- and 50-year-olds you wouldn’t want as your pilots. After 65, there should be enhanced medical requirements, but let them go as long as they can.”

He acknowledges the time and cost to train pilots. “It’s a multi-year process to start school, and then you need the aircraft.”

Leighnor added that the airline business needs more airplane mechanics, as well. Training programs take about two years. He says some companies are paying airplane mechanics about $30 an hour to start right out of school. QCBN