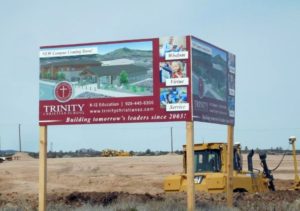 After more than 15 years of strategic planning and success in implementing a $10 million capital campaign, leaders at Trinity Christian School (TCS) are moving forward with construction of a 17.5-acre school campus.

Current school grounds are located at 1077 Mogollon Road, just south of Willow Lake Road at the north edge of Prescott. It was established in 2003.

She said construction marks the end of one stage and beginning of a second in the long-awaited Great Expectations Campaign. Parker said enrollment growth and expansion had been so intense these past few years that board members accelerated school construction plans. The school is expected to eventually accommodate 600 students, ranging from preschool to high school.

Development will include three phases, with elements such as classroom buildings, a gymnasium, a cafeteria, an administrative building, the preschool, soccer and track fields, tennis and basketball courts, playground areas and a large parking lot.

Architectural plans for the project were created by Michael Taylor Architects, a Prescott-based firm that has designed projects for clients throughout Arizona.

Parker explained that Headmaster Kyle Maestri has long been insistent that student-teacher ratios remain reasonable and that class sizes never exceed 25 students. She said student enrollment has grown annually, even to the point of having a waiting list. Since 2015, the school has needed more space.

When construction of a gym, a two-story classroom and administration spaces is complete, the expectation is that having two classes each for grades six through nine will permit the adding of another 100 students, according to Maestri. That will increase enrollment to 450, about a 33% jump over current numbers.

Maestri said, “This allows two critical things to happen. One, we will fill out the K to five classes completely, accommodating 225 students. Two, moving upper-grade students allows the sale of our present high school building, releasing funds for the future building campaign.”

Later construction includes buildings for grades K-8. It also includes the cafeteria, athletic field, track and playground. Those additions will permit capacity of a projected 284 students in grammar school and 288 in high school.

Final construction will complete the consolidation of all school activities onto one campus. That phase will see a fine arts auditorium added. Also to be added is a preschool, which is a new entry into educational curriculum for TCS.

Parker said curricular additions will accompany campus expansion, including Advanced Placement and Honors classes, Technology innovations and STEAM (Science, Technology, Engineering, the Arts, and Math), which will further growth of the academic program.

The TCS board adopted what it called “Three Strategic Strategies” in the spring of 2019. They were: to establish a permanent home for the school; to equip students to change the world around them; and, to grow better than ever in classical education the academic program and additions to fine arts and sports programs.

Barring unexpected delays, YCS officials anticipate moving into some of the Willow Hills facilities by August 2021. All construction is expected to be completed by late summer 2023. QCBN