You are here: Home / Columnists / Valley Fever Vaccine Expected to be Coming Soon 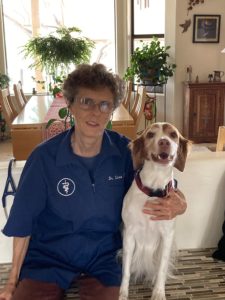 It has been estimated that more than 30 million dogs are now at risk for Valley Fever.

Coughing, fever, weight loss, lack of appetite – these worrisome symptoms are all cause for alarm when exhibited by loved ones, including family pets. If you recognize these clinical signs of illness in your dog or cat, it could be an indicator of Valley Fever, a serious though relatively rare medical condition prevalent in the Western and Southwestern portions of the United States. Valley Fever is a systemic fungal disease caused by inhaling Coccidioides spores. The Coccidioides fungus is found most commonly in soil, and dogs are especially prone to infection because of living their lives with their noses to the ground. Arizona dust storms aren’t helping matters, either.

Symptoms in humans resemble the flu, but dogs are regrettably more likely to develop heightened forms of the disease with muscle wasting, seizures and bone and brain lesions. That’s why scientists and veterinarians with the University of Arizona’s Valley Fever Center for Excellence have been working for 25 years to find a vaccine for the debilitating disease. According to the center, two-thirds of all U.S. Valley Fever infections are contracted in Arizona, even though nationally, Valley Fever is uncommon.

Recently, it was revealed that all of the center’s hard work has paid off with the announcement of Anivive, a groundbreaking fungal vaccine successfully vetted for Valley Fever in dogs. Reported as being the first vaccine with demonstrated efficacy against a systemic fungal disease, Anivive’s vax has so far been shown to afford protection in 100% of vaccinated dogs. Led by center founder and director Dr. John Galgiani, M.D., the group’s work was featured in a recent Scientific American article.

Dr. Lisa Schubitz, DVM, a biomedical researcher with the UofA team working on the vaccine, spearheaded a three-year study into the epidemiology of Valley Fever in dogs in Tucson and Phoenix.

She says that diagnosis of Valley Fever is performed through blood draws and X-rays. While there is no guarantee of saving the animal, current treatment options take an average of six to12 months and can be expensive. However, the Anivive vax is projected to be available by 2022. Like all vaccines, however, the purpose is to keep beings from contracting the disease, so dogs who already have it at the time of the vaccine’s eventual release won’t be helped by Anivive.

It has been estimated that more than 30 million dogs are now at risk for Valley Fever. While dogs are most frequently infected, it affects a wide array of animals. While it’s been difficult to get funding for research, she said, “There are a lot of angels out there helping the animals, and the shelters in the area have been doing a really good job. I’m continually amazed at these people who will take these dogs that are so sick.”

On a positive note, the success with dogs has been, as Shubitz pointed out, a proof-of-concept moment that is leading to a similar vaccine for humans in the near future. QCBN