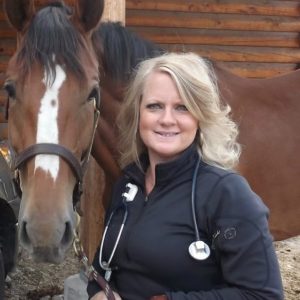 When Cindy Barnes bought the Prescott Area Pet Emergency Hospital (PAPEH) in April 2015, she had no idea that within weeks, she would convert it to a 24-hour-a-day, seven-day-a-week facility that would soon serve all of Northern Arizona.

Barnes, who earned a Doctor of Veterinary Medicine degree from Colorado State University in 2012, understands that pet owners want the same kind of care for their non-human companions as most people want for their direct family and friends.

But when the pet hospital opened two years before, it offered only limited emergency care and critical care services on weekends and major holidays.

“I soon found myself staying during the days when we supposedly were closed. I’d also have people showing up at the door with pet emergencies,” she said.

Though most patients are household pets, Barnes laughs and says that if an animal can fit through the door, her team will treat it.

The native of Arcadia, California, grew up around racetracks and was – and still is – enamored with horses. Later, when she first received her Doctor of Veterinary Medicine

degree, she worked in Kalispell, Montana, where she opened a large animal ambulatory practice. However, her husband, Steve persuaded her to leave the snow country and dark winters and move to Arizona. She discovered Prescott in January 2014.

All that time, she anguished over the amount of time that medical record keeping for her animal patients was taking. She said that effort was detracting from the time veterinarians had to care for sick animals.

“My practice has increased revenues by 20 percent or more every month since we implemented Shepherd Software. We have completely eliminated staff overtime, and the doctors and technicians love how quick and easy charting is with Shepherd.”

Her company has an office in Prescott and another in Seattle, where four developers and a designer continue upgrading the programs.

“I think Cindy will create one of the most exciting software companies imaginable right here,” said Jim Robb, economic development consultant for the City of Prescott. “She is a visionary, an entrepreneur and a successful businesswoman. We need to support her and her efforts in Prescott.”

Barnes recently sold the PAPEH to Pathway Partners, from Austin, Texas. However, she remains on staff as medical director until next August.

Barnes explained that she wants to expand the search for developers and sales representatives as Shepherd grows. “I hope we can attract skilled personnel to Prescott where we can develop a technology hub and code school and grow some developers,” she said.

What character traits do you admire most in associates?

“Self-starters, team-players, motivators – and those who come to work with a positive attitude every day. I can train skills, but I cannot train people to have a positive attitude in the face of chaos. If my team is not in sync, I cannot deliver the best medicine for the most successful outcome.”

What is your favorite activity when you are not working?

“I ride horses. I’ve competed in show jumping my entire life. But now, I just trail ride, for I’m too busy. I do have two horses so I garden for them. I grow tomatoes and carrots.”

What kinds of things bother you?

“I am always suspicious of people who attend events to protest something, but when you ask what they are protesting, they don’t have a concise answer. I believe, if you are going to stand up for something, try to educate yourself on what you believe. Don’t just be part of the crowd.”

What was your last guilty pleasure?

“These days, my guilty pleasure is taking a day off – literally. I work three plus days a week at the ER, and every day for Shepherd Software. I’m always ‘on,’ so to speak. Just turning off my cell phone is a guilty pleasure. But the big (recent) pleasure – taking a vacation with my family for a week on the big island of Hawaii. All my kids (five), their spouses and my practice manager and her family were there. Amazing.”

When they make the movie about your life, who should play you?