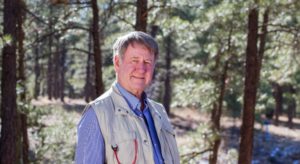 At 6 feet, 4 inches tall, Wally Covington has a commanding presence in the halls of Congress as well as in the forest, and he is completely comfortable in both. A giant in the world of forest health, Covington’s influence can be seen where old growth ponderosa pine trees thrive in clumps, where park-like conditions allow for sunlight to reach the forest floor, where butterflies and wildflowers brighten the landscape with pops of color, and where mountain communities feel safer from the threat of wildfire.

His impact is also evident in classrooms, laboratories, research stations, National Parks and National Forests where four-and-a-half decades of students that Covington mentored and developed continue to practice what he taught as the latest generation of scientists.

As Covington retires from his role as founder and executive director of the Ecological Restoration Institute (ERI) and Regents Professor of Forestry at Northern Arizona University (NAU), colleagues applaud him as a tireless crusader in the battle to ensure healthy forests will remain for future generations to enjoy.

“He was one of the first voices to warn about the threat of really large fires in the Southwest,” said NAU Forestry Professor Pete Fulé, who had worked as ERI director of research and development until 2010. “Given the fuels and climate that we have, he encouraged people to be proactive long before the big fires took off in the early 2000s.”

Covington came to Flagstaff and NAU in 1975 after having just graduated from the doctoral forestry program at Yale University. His early research as an assistant forestry professor revealed that ponderosa pine forests evolved with frequent ground fires, which cleaned up dead and dying debris. However, because forest fires had been suppressed with European settlement of the West, Covington explained forests were now dark, overcrowded with small trees and thick with fuel that could result in unnaturally destructive fires that raged into the tops of trees and burned hot even into the soil.

“Wally was a true believer in the science,” said former ERI Director of Outreach Bruce Greco. “He always came back to the basic principles. Whether he had an opportunity to train, teach or testify, he represented very sound restoration science. Wally was a master at laying the science out there on the table in a clear, concise and believable way.”

By 1994, Covington and colleagues designed the first scientifically rigorous experiments to test different restoration approaches that included mechanical thinning and burning. “His research demonstrated that in many cases, prescribed fire alone was not going to restore forests and, in fact, could prove counterproductive,” said NAU School of Forestry Executive Director Jim Allen. “Over time, this work led to the development of a ‘presettlement model’ of restoration, which involved determining the density and distribution of presettlement trees on a given site and using that information as a point of reference for developing thinning and burning prescriptions.”

While Covington and his students were conducting breakthrough research, wildfires across the West were indeed growing in size and burning with greater intensity. Armed with peer-reviewed science, Covington became a vocal advocate and spokesperson for the urgent need to increase the pace and scale of forest restoration.

During a congressional field hearing in Flagstaff in 1995, Covington told lawmakers that action was needed immediately because fires would soon increase to the scale of 100,000 acres. Many dismissed him as an alarmist, but not U.S. Interior Secretary Bruce Babbitt.

“Bruce called me right before he was being interviewed on the Today show,” recalled Covington. “He said, ‘Wally, you’re going to get some phone calls. When they ask you what the ‘Flagstaff Model’ is, it’s whatever you’re doing.’”

Former Arizona Sen. Jon Kyl worked closely with Covington, as well, to better understand forest health conditions and find solutions to the growing wildfire problem. “Without Wally Covington, I don’t believe we could have developed the consensus that now exists for how to restore our forests to their proper ecological condition,” he said. “His pioneering work created the trust necessary for all stakeholders to support the same general forest management program, and helped move the solution to a scale necessary to treat all of the forest before it succumbs to fire and disease.”

“Coming from an academic background as a forest scientist, Wally contributed a lot in that field, but one of his greatest accomplishments was bringing together research and management to try to address the problems of degraded forests and try to reverse them to restoration,” said Fulé. “He was able to put scientific findings into action by motivating scientists, academic community members and policy makers from local to international levels to focus on forest restoration.”

Although known and respected throughout the world, Covington was perhaps most successful in the Southwest. “Through the formation of the ERI at NAU and also restoration institutes in Colorado and New Mexico, Wally recognized the need to integrate social scientists in the Institutes to work with communities in the urban interface.”

“It’s difficult to imagine restoration work across the Mogollon Rim without Wally involved,” said Kaibab National Forest Supervisor Heather Provencio. “I first met Wally when we were working on the Greater Flagstaff Forest Partnership [GFFP] in the early 2000s. We were madly clearing NEPA and knocking out survey work to prepare to systematically treat forests surrounding Flagstaff. The Rodeo-Chediski Fire, the biggest in Arizona history at that point, was front and foremost on our minds and a reminder of the urgency of our work.”

Longtime Flagstaff residents may recall the glow from the Rodeo-Chediski Fire when two wind-driven wildfires combined to become one in June 2002. Local communities such as Show Low, Pinetop-Lakeside, Heber-Overgaard were threatened and thousands of residents were evacuated. It was the worst forest fire in Arizona history until the Wallow Fire burned more than 733 square miles nine years later in eastern Arizona and western New Mexico.

“Wally eloquently described the problem and our need for funding and support for landscape-scale restoration, even while many others were also clamoring for funding at the same time,” said Provencio. “Without his advocacy, I wonder if we would even have 4FRI [Four Forest Restoration Initiative], if we would have gotten the attention of Congress and received sufficient funding to support the effort, and, if we would have brought together such a diverse and passionate group of stakeholders to support this level of restoration.”

Covington was born in the Arbuckle Mountains of Oklahoma where he and his brothers alternated Sundays with going to church and outdoor adventures. His parents had both served in World War II as pilots and his dad was a big fan of early 1900s conservationist and ecologist Aldo Leopold.

“I have a real appreciation for those who have advanced the land ethic and promoted being in harmony with nature,” said Covington. “That’s the secret to living sustainably over the long haul.”

Science magazine once called Covington “the nation’s most visible forest scientist,” and the ecologist has won numerous awards, including the prestigious Biswell Lifetime Achievement Award from the Association of Fire Ecology. His greatest joy, however, has been working with students in research and managers to restore the land.

Covington sums up his career as “a walk in the woods,” but his reach could arguably be considered a hike that never ends. He has had an influence on more than 12 million acres of the West. “Going to where we’ve treated and seeing how beautiful it looks, that’s the most rewarding part.”

“NAU has been proud to call Dr. Wally Covington one of our distinguished researchers, whose contributions to the research and outreach activities on forest health and ecological restoration are renowned,” said NAU President Rita Cheng.

Currently, Covington is being considered for Regents’ Professor Emeritus status, a nomination submitted by Allen, who stated, “His enthusiasm for his subject matter is infectious and has helped extend his influence well beyond what he could have possibly accomplished on his own both in terms of the science itself and its on-the-ground impact.”

“I have always thought of Wally as one of the modern-day fathers of ecological restoration, with Aldo Leopold being one of the grandfathers,” said ERI Research Specialist Mike Stoddard. “Wally has always made it clear to me that the equation for a healthy ecosystem must include humans as part of the community. And, constructive listening and critical thinking are some of the most important tools that we need to utilize to be part of the land ethic.”

“Landscape restoration has become a reality thanks to his vision and dedication. In my mind, Wally is a real hero in Northern Arizona history,” said Provencio. “It has been an honor to work with him.” QCBN