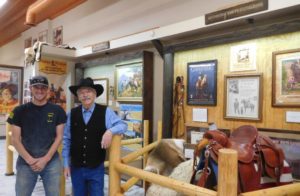 In less than six months, the Western Heritage Center (WHC) located in downtown historic Whiskey Row has become a popular destination attracting visitors from throughout Arizona, the Southwest and the nation.

Most visitors are from the U.S., with many from California.

Dennis Gallagher, owner and founder, says Europeans, especially Germans, are intrigued by the WHC and learning about the diverse history and culture of Yavapai County. “I’ve had German visitors tell me they really appreciate the center because it’s small enough to be comprehensible, yet big enough to provide a solid learning environment,” said Gallagher.

Since the WHC does not charge an admission fee, it is impossible to register everyone who walks through the door. However, a significant number of visitors sign the guest book. A review reveals that visitors from all 50 states and from 30 foreign countries have come through the door of the 4,000-square-foot century-old building.

The same records show that since the WHC had its ribbon-cutting in May 2019, more than 35,000 people have viewed exhibits. “We expect that number to increase steadily this spring and summer, especially since the WHC has received such positive support from the community, making it possible to open the doors. We especially appreciate the Quad Cities, the local chambers of commerce and the Arizona Office of Tourism for their encouragement,” Gallagher said.

It has been 10 years since Gallagher and his wife, MaryAnn, had the idea for a heritage center that would highlight Yavapai County’s history and culture. In the nine years it took to form a volunteer board of directors, find an appropriate downtown site and then remodel what had been a warehouse into a exhibit hall, Gallagher and his team have managed to identify and include virtually every organization in the county that has contributed to or helps preserve the region’s heritage.

“We take pride that we cooperate with all the other museums, galleries and historical sites in the area. What we have is a sampler, if you will, of the rich Native American, mining, railroad, early pioneer and ranching, and certainly cowboy culture that makes Prescott and the surrounding Central Arizona different in the Southwest,” he said. “We do everything we can to promote other area attractions, for we all benefit. What most people don’t know is that we administer and operate the WHC with an all-volunteer staff. We have no paid employees.”

Gallagher and Curator Marilyn Fisher collaborate with participating museums and private exhibitors to determine what forthcoming exhibits will focus upon. WHC provides the exhibit space, and cooperating organizations supply their own artifacts, memorabilia and exhibition details.

For instance, currently on exhibit is information related to the Woman’s Suffrage movement, which is now celebrating its 100th anniversary. Several local women had major roles in that social change.

Other exhibits include memorabilia from early law enforcement. Yet another is about early ranchers and cowboys who came to the region. Still another features artifacts from historic saloons and gambling halls.

A popular exhibit is one featuring movie posters, which have been produced in Prescott. In the silent movie era, dozens of western and cowboy films had the Prescott area as the dominant base. Famed cowboy actor Tom Mix had his own studio in Prescott at one time.

An especially popular exhibit that appeals to young and old alike are images from a 16-mm black-and-white silent movie produced by the Ford Motor Company in the early 1920s. That film features local firefighters and their friends in spirited water fights with fire hoses. It also has scenes from an early parade around the Courthouse Plaza, with kids running a foot race in cowboy boots. A large segment of the film features cowboy competitors at the Prescott Rodeo, now considered the “World’s Oldest Rodeo.”

“We host a lot of school tours through the WHC, and the kids all enjoy that old movie – a look at the way things were in Prescott more than 90 years ago,” Gallagher said.

Hours of operation vary, but generally, the WHC is open from 10 a.m. to 4 p.m., Friday, Saturday and Sunday. Gallagher said he imagines hours will be lengthened during the summer tourist season.

Several special events are planned in conjunction with the WHC. A major one is a private screening of “Wish Man,” a commercial movie that tells the story of Frank Shankwitz, a Prescott resident who founded the internationally recognized “Make-A-Wish Foundation,” which provides memorable experiences for terminally ill youngsters.

It begins with a VIP reception at 1 p.m., Sunday, April 5, in the Elks Theatre on Gurley St.  The movie will be screened at 3 p.m.  Tickets for the VIP reception and film are $40 each.

Tickets are available online at prescottelkstheater.com, at the Elks Theater ticket office, or by calling 928-777-1370.

The event is a fundraiser to support the WHC. QCBN