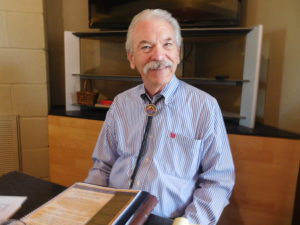 In the three years it has been open free to the public on famed Whiskey Row in Prescott, the Western Heritage Center (WHC) has become one of the more popular destinations for visitors in downtown Prescott.

Founder-owner and president of the WHC, Dennis Gallagher, is inviting anyone who wants to attend to help him celebrate its third anniversary during the three-day Memorial Day weekend, 10 a.m. to 5 p.m., Friday and Saturday and noon to 4 p.m., Sunday from 12 noon to 4 p.m.

“Our team has planned several special activities. That includes live music and entertainment, raffles, door prizes and much more—and all with a big hearty handshake and ‘Howdy, how are ya?’” said Gallagher.

Pierce also said most the hosts at the WHC will be dressed in period attire representative of Western heritage.

In just the past few months, the WHC has attracted more than 40,000 visitors. “We don’t try to keep track of where they’re all from. But when they sign the guest book, we get a good idea. I find it gratifying to see so many more people now traveling nationally and internationally,” Gallagher said.

Prescott Mayor Phil Goode agrees. “I often stop in at the Heritage Center since it’s so close to my office. I get to meet a lot of new people visiting town and I enjoy sharing what I know about Prescott. But what’s more important, when people come in here, they begin to realize how truly historic Prescott is in the scheme of Arizona history—its culture, its traditions and certainly, its strong cowboy culture.

Goode said the WHC had become a doable destination for many casual visitors. “They can come in here for free, they can stroll around at their leisure and they can walk out knowing they have seen things that were a part of the real lives of ordinary people. I totally endorse the WHC.”

Even though WHC was closed during much of the pandemic, its image as a source for the preservation and promotion of the Western heritage so prominent in the Quad Cities has grown nationally and internationally.

Records show that since opening May 16, 2019, tens of thousands of people from all 50 states and more than 55 documented countries have walked through the doors at 156C South Montezuma Street.

“What I and my fellow board members and directors take pride in is that we’re providing a facility unlike any other in the region. We are not a museum. Rather, our goal is offering visitors an educational experience focusing on the history and heritage of Prescott and Yavapai County. What we have is a showcase of artifacts – art, music, literature, photos and movies, exhibits from real ranches and farms, mines and businesses – things that were a part of the lives of the people who live here,” Gallagher said.

More than 40 volunteers contribute their time to keep the WHC open for visitors.

“We can always use more people to help,” Gallagher said, “especially when we started inviting third and fourth graders back again from local schools to come visit for educational tours. We hope to be doing that as soon as officials tell us its healthy to do so.”

The WHC is sponsoring a fundraiser from 5:30 to 9:30 p.m.,  May 14, at the Elks Theatre on Gurley. Tickets are available through the WHC office.

Gallagher said he and the WHC Foundation is cooperating with the city, the Prescott Rodeo, the Prescott Chamber of Commerce and other local museums and hotels to help support the upcoming Prescott Frontier Days Rodeo, Tuesday, June 28 through Monday, July 4.

The board also is planning its annual fall Western Heritage Banquet. “We’ll be announcing more about that event in the near future,” Gallagher said.