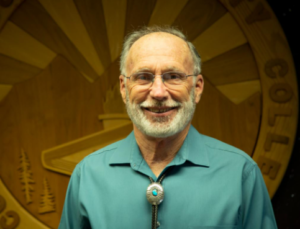 The Coconino Community College District Governing Board voted Wednesday to name Dr. Nathaniel White as its next Chair.
“It has been a pleasure to work under the calm, steady leadership of Governing Board Chair Patty Garcia and with my dedicated Board members for the past several years,” White said. “It is an honor, and I look forward to being a part of the Governing Board and the CCC family as we optimistically move ahead in 2021.”
White, who was voted into the position of Chair unanimously during Wednesday’s meeting, takes over for Board Member Patricia Garcia, who has held the Chair position for the last six years. White, who has been a member of the board since November 1998, represents District 1 for Coconino County, which covers part of Flagstaff and extends to Tusayan, Supai and the western edge of the county.
The Board also voted unanimously to name Board Member Joseph Smith as Vice Chair.
“I am excited to serve as the vice chair of the CCC District Governing Board and to work alongside Chair White,” Smith said. “His many years of public service, including his extensive time on the District Governing Board, will be greatly beneficial to the board and the College as a whole.”
Smith, who lives in Page, added that he would like to thank former Chair Garcia for being exemplary in her role.
“Her graceful and passionate leadership has been hugely influential in guiding CCC to where we are today, including the unprecedented times experienced over the past year with the pandemic,” Smith said.
Smith represents District 5 for Coconino County, which includes Tuba City, Page, Fredonia and much of the northern part of the county. Smith began his service as a Board Member in August 2019.
White and Smith begin their leadership roles Monday, Jan. 25, during an annual Board Budget Retreat, and they will serve in those roles until January 2022.
For more information about the CCC District Governing Board, agendas and minutes, visit www.coconino.edu/district-governing-board
About Coconino Community College
CCC has served residents across 18,000 square miles of Coconino County since 1991. The College has the goal of improving the lives of our residents through workforce development and higher education.
CCC provides affordable tuition and offers certificate programs and two-year associate degrees in academic and career fields. CCC also has programs that ease student transition to any of the three state universities, including the award-winning CCC2NAU.
CCC reaches out to the more rural portions of the County and Tribal Lands. Instructional sites offer classes through online, in-person and Zoom video conferencing classes to meet the needs of students in rural and remote areas. Nearly 20 percent of CCC’s students are Native American learners.