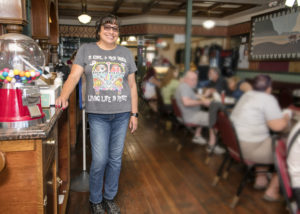 Located just past the train tracks in downtown Williams, Anna’s Grand Canyon Cafe is typically bustling with the sounds of merriment, busy utensils and culinary preparations. “I’ve been coming here for almost 10 years,” said Bob Sarkesian, a retired gas company manager. “She has really good quality food, like your mom or grandma would make. I never had a bad dish and her Grand Canyon Burrito is pretty hard to beat.”  t is one thing when the locals around your hometown know you and your restaurant by name, but it is another when you are recognized and voted as one of the 10 best restaurants by Arizona Highways magazine. Such is the case with Anna Pena-Dick, owner of Anna’s Grand Canyon Cafe.

Simply known as “Anna’s” to the locals, Pena-Dick has owned the café for 12 years and says the most rewarding aspect of owning her own business is the freedom to give to the community. “I was born and raised in Williams and love helping the community. I love the people here and my customers, so giving back is important to me.”

Doing business as Anna’s Place, Pena-Dick says the official name is Grand Canyon Café. “When people around Williams would refer customers, they would simply say Anna’s place. So, we went with the name, too.”

Pena-Dick says the most popular items on her menu are her Canyon Burrito and Southwestern Country Fried Steak. “These are two of our signature dishes. The Canyon Burrito is prepared enchilada style and the country fried steak is covered with pork green chile.”

Almost all dishes were inspired by her mom’s recipes and all sauces are made in the restaurant. “You can’t get these menu items anywhere else,” she said. The Grand Canyon Café serves breakfast all day.

“The Canyon Burrito is what won our Arizona Highways award,” said Pena-Dick. “The Williams Volunteer Fire Department recommended our restaurant to the magazine.”

“I believe there was an informal poll around the fire station,” said Williams Fire Department Chief Kevin Schulte. “We would definitely recommend eating there: great service and great food. If we did another poll among the firefighters, I would assume Anna’s would prevail again.”

When asked about expanding her business, Pena-Dick says she is comfortable with the business.  “I have a great staff of 12 to 14 employees. I’m almost 60, so although I work less hours than I used to, I do hope to retire someday.” QCBN