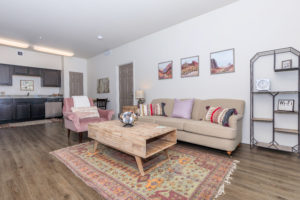 Area residents who prefer apartments in the north-central area of Prescott now have that opportunity.

Owner-developer Cole Johnson told the Quad Cities Business News that the garden-style apartments had been many years in the making.

“We now have from the City of Prescott certificates of occupancy. Residents are moving in. I’m thrilled to see these new residents in what I believe are the nicest apartments of their type in the community.”

There are seven buildings in the complex, one of which is the clubhouse building and fitness center. The approximate value of the total project is approaching $40 million, Johnson said.

Six apartment floor plans range in square footage from about 670 to 1,188 square feet. Floor plans can be viewed at willowcreekaptsprescott.com/floorplans. Rental rates also can be viewed on the same link, Johnson said. They range from $1,100 to $1,768 a month. Some utilities are included.

Currently, those interested can take advantage of the grand opening promotion, which allows the choice of a six-month rental option. Also available is an extended stay rental for a minimum of 30 days.

Johnson said all units feature a full-size washer and dryer, stainless steel kitchen appliances, granite counter tops and spacious living areas with wood plank flooring and carpeting, mini-blinds and curtains, and central air and heating. Also, each unit has its own balcony or patio, and all are adjacent to open space. Some units offer disability access.

Johnson pointed to the north and west of the complex, saying, “I don’t think anyone in Prescott can get a better view of sunsets or Granite Mountain just west of here. Residents are also within minutes of the best hiking and biking, and just down the road, Willow Creek Lake.”

Covered parking is assigned to the apartments. The carriage houses have detached garages.

The clubhouse, located near the entrance to the complex, has a full kitchen, complemented by several outdoor barbeque areas. It also has a community entertainment center for private events. The fitness center is open 24 hours daily.

All residents have access to an on-site fenced dog park.

Johnson said his family has been in the community for years. Originally from the Phoenix area, they came here in 1984 and settled in the Williamson Valley Area. Johnson, now 49, attended Prescott High School, where he was an all-around athlete. Following graduation as a Badger, he attended Northern Arizona University, where he earned dual degrees in accounting and finance.

For years, his family has been involved in the construction industry, not just in Prescott but also Phoenix, Tucson and Las Vegas. The family business – Paul Johnson Drywall – was established in 1967 and is considered one of the largest specialty contractors in Arizona and the Southwest.

“We’ve got more than 3,000 employees and we’ve handled more than 8,000 homes and multi-family projects in recent years,” said Cole.

Despite demands from other job sites, Johnson says he tries to spend as much time as he can in Prescott. “I think it’s important to pay back to this community that has been so good to me and my family. For example, we are directly involved in helping the Coalition for Compassion and Justice and similar organizations in solving the homeless issue. We cooperate with other contractors in providing assistance where we can.”

Recently, Johnson was named to the Prescott Community Development Taskforce to assist in mass production with large developers.

Johnson says a recent challenge for most contractors has been finding trained labor.

“Sometimes, it’s really hard to find qualified trades personnel, especially when a lot of building is going on.”

Even so, Johnson has confidence in the future positive economic growth and prosperity. He’s currently working on another master-planned community just north of Prescott, Whispering Canyon, located on Williamson Valley Road.

“I believe in Prescott and the kind of lifestyle we enjoy here,” he said. “I assure you that our firm will be here for years to come.” QCBN