You are here: Home / Local News / Women Pilots Take to the Air 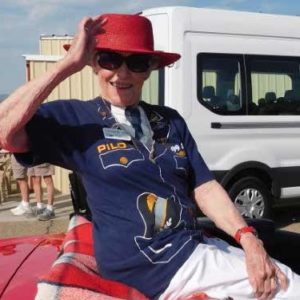 “One of the biggest thrills of my life – being able to hold the American flag to start this 40th annual Air Race Classic for women.”

The sun was bright and warm in the early morning sky. So was Penny Carruthers’s smile as she waved the Stars and Stripes and the first plane roared down the runway.

The petite 94-year-old waved that same flag for 53 more women pilot teams. They had arrived in Prescott on June 17, for the nation’s premier transcontinental speed competition for women pilots. The pilots, their friends and families from across the United States stayed for several days in the Quad Cities and spent thousands of dollars before they crossed the starting line on June 21, at Earnest A. Love Field on their way to Daytona Beach, Florida.

Carruthers, who earned her pilot’s license in 1966, when she was 44, kept flying until she was 85. In fact, she had flown in the historic race when it was called the Powder Puff Derby before race format and name change occurred 40 years ago. “Aviation found me – and I was never the same again,” she said.

Carruthers now lives in Prescott. Previously, she lived in Sedona, when she and her husband helped start the airport in 1971.

Hundreds of locals and visitors joined her to send off the 54 competing teams, on their way across 2,400 miles for the next four days. They would stop only for refueling and overnight stops.

Both campuses for ERAU – Prescott and Daytona Beach – had collegiate entries in the race. “We’ve quite proud of our Lady Eagles and their aviation skills and willingness to compete in this major cross-country race. But we’re also quite proud that ERAU is the host for the race, not just in Prescott but also Daytona Beach,” said ERAU-Prescott Chancellor Frank Ayers.

“This competition has given positive viability not only to ERAU but also to Prescott, where volunteers, hosts and sponsors have been exceptional,” Ayers said.

Penny Carruthers, a 94-year old retired pilot with more than 50 years flying experience, was named official starter for the 40th annual Air Race Classic, which became airborne in Prescott on June 21. She and Theresa White, an ARC board member from Kent, Washington, shared stories of their cross-country flying experiences before the race began.