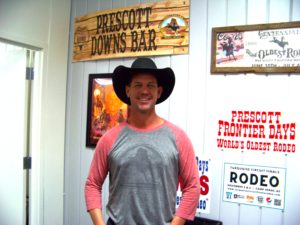 If current trends are accurate predictors, the 2022 World’s Oldest Rodeo will break existing records in virtually every category.

It is Brown’s second year of managing the rodeo. He, the board of directors, and organizers have made significant changes to both facilities and the rodeo program. With support from the City of Prescott, sponsors and other resources, they are investing millions of dollars to upgrade and improve the existing rodeo grounds and arena, which have been home to the rodeo since 1913.

But the rodeo itself goes back 134 years, when it started as a “cowboy tournament” on the 4th of July. Since then, it has become one of the top 30 in the country.

Brown, who has been involved in rodeos and rodeo management most his adult career, came to Prescott from his prior role as director of the Socorro, New Mexico, Sports Complex.  He and his wife, Jody, have an adult daughter who now lives in Oklahoma. Because of his many years of competing in rodeos nationally, Brown is familiar with Prescott. In fact, he won the saddle bronc riding competition twice – once in 1995 and again in 2003.

“Rodeo is big business and it certainly is a contributor to the overall Prescott economy,” he said. ”That’s why we’re investing so much in upgrading and improving this year and in coming years. We have seven full-time employees and during the season, [between] 400 and 500 volunteers who make this rodeo successful.”

Changes are being made to events, as well, with more money to be won. “We had a record number of cowboys in 2021, 686 of them, and we expect more this year. We had event sellouts last year and we’ve added events for this year. One, the kids will love – mutton busting –  where kids get a chance to ride a sheep in front of a crowd.”

An opening kickoff party for sponsors and dignitaries on June 27 will feature a special screening of the award-winning movie “Junior Bonner,” starring Steve McQueen, filmed 50 years ago in Prescott at the rodeo grounds and downtown around the Courthouse Square.

“We also know traffic and parking are tough to fight. That’s why we have reserved Mile High Middle School on Thursday through Sunday for an event. Because we know not everyone can get to the rodeo grounds, we’re working on what we hope will be a downtown rodeo experience. The days we sell out, we’ll have vendors downtown and rent a big screen and stream the rodeo down there.”

RCG President Jim Rounds told them that because of the proposed expansion of the rodeo groups and its operations, the community and the state should get even more involved in promoting the activities as something that significantly benefits the region and the state economically. Rounds suggested the rodeo has such a strong impact that it might even qualify for grant opportunities.

PCG Vice President and Senior Economist Luis Cordova said that an economic and fiscal impact model had been developed for the 2021 rodeo. Among key points, the rodeo: attracted 81,500 visitors to Prescott; generated more than $33.5 million during the year; created 337 jobs; and resulted in state and local tax revenues of $.2.6 million – $780,000 to the City of Prescott, $324,700 for Yavapai County, and $1.5 for the state.