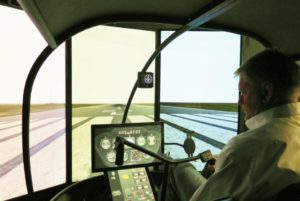 Flying in a helicopter may well be an experience most of us will never forget. But piloting a helicopter is like trying to rub your head in a circular motion while patting your stomach and dancing the Macarena – all at the same time, according to a local pilot.

Every part of the body is moving – just like the parts of the helicopter. And all parts – human or helicopter – must be under absolute control. Complicating the process are factors like weather conditions or system failures.

Above all that is the expense of learning to fly. Costs are in the thousands.

John Stonecipher, president and CEO of Guidance Aviation in Prescott, is confident he and engineers and other technically skilled people with his firm can introduce a sophisticated training device that will save time and money for aspiring helicopter pilots. He is striving to bring more pilots into the rapidly growing multi-million dollar aviation industry. He says the need is great, citing examples of first responders and wildfire crews who use helicopters routinely.

“Pilots for years have used realistic simulation software while learning to fly. But most of that simulation-support was for fixed wing training. Only recently have helicopter training programs embraced simulators,” said Stonecipher.

That is what prompted him to create XCopter, a true-to-life helicopter simulation experience that parallels the real world that Stonecipher found in a Robison Helicopter Aircraft.

Stonecipher said he admired Robison helicopters during his teen years, so he learned to fly a chopper by the time he was 18. Shortly thereafter, he became a test pilot for Robinson. That led him to found Guidance Aviation in 1998.

Now located in Prescott, Guidance Aviation has grown into a nationally recognized aviation company with more than 100 employees, 25 aircraft and education partnerships with collegiate institutions around the United States, including in Prescott.

Prescott native John Markham, who earned a degree in electrical engineering from Embry-Riddle Aeronautical University-Prescott, has years of aviation experience in his educational background and his years in the Army as an Airborne Ranger. He recently joined the Stonecipher executive team. As production and project engineer, Markham knows every detail about the XCopter.

He supervises the construction of every XCopter produced and provides in-depth background to every potential user or buyer of the simulators.

The base cost for the XCopter can be as much as $100,000, but as Markham explains, that is many thousands less than a real helicopter for training students. He says the XCopter provides a solid learning platform through simulated flight without the expense of fuel, maintenance and upkeep. And it can be used no matter how bad the weather is outside.

What Makes XCopter So Real?

Markham says XCopter was designed to replicate as closely as possible a true-to-life experience such as you would get in a Robinson helicopter. “Once you’re in the cockpit, you’ll feel just like you’re in the physical and functional environment of a real aircraft.”

He said the advantage of using the XCopter is that an instructor can control the learning environment for the student’s benefit, making it safe for students to practice complex maneuvers and master difficult skills.

“A good thing, too, about the simulator is that we can create emergencies and systems failures and other malfunctions in a risk-free environment, unlike what would happen if we were in an actual craft. The instructor can surprise the student with an emergency – without crashing him.”

He explained that simulator shape, seating, controls and the two high-resolution touch screen instrument panels replicate that of a real helicopter. In a curved display, four massive 55-inch video screens wrap around the cabin frame and surround the pilot with a crisp, full-color panoramic view of the immediate outside world.

“The reality continues when you use flight controls,” said Markham. “We spent hundreds of hours engineering and manufacturing these controls to exact specifications. The cyclic, the anti-torque pedals, and the collective/throttle a pilot uses are precisely modeled after the ‘real thing’ in a Robinson helicopter. Our technical design and precise computer control equate to the digital precision you’d encounter in flying the actual craft.”

Instructors train students in the simulator to fly in all kinds of terrain and weather, and have the option of practicing at more than 30,000 airports around the world. All that is possible because of software that recreates the situation in a selected community or country.

“We can figuratively and visually take you from our Prescott airport to one in Florida – or in Florence, Italy – all through sophisticated computer programing,” Markham said. He demonstrated by switching from the arid high country of Arizona to the coastal inland and waters of Monterrey Bay in California.

Along with training future helicopter pilots, Stonecipher, Markham and other officials at Guidance Aviation are manufacturing XCopters for sale to other firms.

“The nation and the world has a need for trained and licensed helicopter pilots, and we’re in a position to help make that happen. We can provide simulation training in one of our 10 XCopters at a much lower cost than that of flying a real helicopter. Once students have polished basic skills through simulation training, we put them into one of the real helicopters we own. They then complete their training and qualify for a license,” said Stonecipher. QCBN