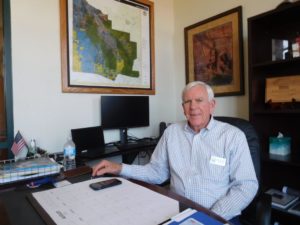 water, broadband expansion and COVID-19 relief.
Yavapai County Supervisor for District 1 Harry Oberg says the population is growing. The latest data show a county population of 236,209 in 2020. In 2011, it was 212,033. Yavapai County, which in pre-statehood days was the “Mother County of Arizona,” had a population growth of 11.93 percent during the past 10 years, according to the most recent U.S. Census Data released. Final census data will be released Sept. 30.

The county has five districts, totaling 8,125 square miles. “Yavapai County is bigger in area than the combined states of Connecticut, Delaware, Rhode Island and New Jersey,” said Oberg. “It’s about the size of the state of Massachusetts – and is bigger than the country of Israel.”

The fastest growing district is Chino Valley, at more than 19%; the slowest growing is the Sedona area, with a growth rate of 4%. Here are the percentages for the five counties:

Oberg doubts the population change will make a significant difference in future district boundaries. “We all need to acknowledge that population growth in Yavapai County was by leaps and bounds,” he said. “We don’t expect it to slow in the future.”

Oberg is careful to note that he and his fellow supervisors – James Gregory, District 2; Donna Michaels, District 3, Board Chair Craig Brown, District 4; and Mary Mallory, District 5 – have the primary responsibility of financing and administering county government projects. That includes final approval over all county budgets and county tax rates.

A major concern among supervisors is the growing issue of water shortages in Arizona. On Aug. 18, Oberg and other supervisors voted to spend $10 million of the nearly $46 million the county is to receive from the American Rescue Plan Act (ARPA) to improve water and sewer infrastructure within unincorporated areas of the county.

Oberg is adamant that residents need to conform to existing water regulations. “We must work with all the water interest groups, not just select ones. We need to act collectively, come up with functional plans and programs that will ensure continued water in the future.”

The funds available for water and sewer infrastructure require detailed applications and written proposals. Information is available at YavapaiAZ.gov under the board links section – ARPA Grant Application. The supervisors will approve the allocation of grant funds beginning Nov. 3.

Early September meetings found supervisors continuing their discussion of broadband program expansion throughout the county. Funds for that program, also to come from the ARPA monies, are to be directed at improving broadband for high-speed internet service in unserved and underserved communities countywide.

Several organizations within the county have endorsed broadband expansion, including the Chambers of Commerce, Northern Arizona Council of Governments (NACOG), and the Yavapai County Education Service Agency.

An estimated $20 million is cited as the figure for that project, Oberg said.

Consideration also is being given to using ARPA funds – as much as $5.7 million – to respond to challenges caused by the pandemic. Some of those dollars might go for additional employees needed to support COVID-19 relief programs.

Supervisors adopted the 2021-2022 budget in early August. Details are available at https://yavapaiaz.gov.

Information provide by Jack Fields, assistant county administrator, showed the general fund budget was $124,809. That is about a 5% increase above last year’s general fund budget. Fields also said among the biggest budget item increases for the coming year is for the criminal justice system, which includes the sheriff’s department, public defenders, probation, jail, juvenile justice and related county offices and agencies.

Oberg encourages citizens to remain interested and involved in county actions. “I hope people will continue to respond to our survey requests and take part in helping us develop comprehensive plans. We need to review and prioritize what is important and we need citizen input to do that effectively,” he said.

Oberg is a longtime resident of Prescott and attended Prescott schools. A career officer and pilot in the U.S. Army, he was honorably discharged in April 2000 as a colonel. He received a degree from Northern Arizona University and has other degrees from Salve Regina University and the U.S. Army War College. He and his wife, Jeanna, retired in Prescott in 2007. He was elected in 2015 as Prescott mayor. QCBN

Oberg can be reached in his office at the County Administration Building at 1015 Fair Street in Prescott, by telephone at 928-771-3206 and online at web.bos.district1@yavapaiaz.gov.