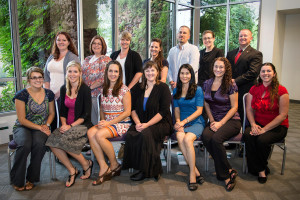 Fourteen newly enrolled Yavapai College students have been awarded full tuition and fee scholarships for the College’s nursing or radiologic technology degree programs. Twelve scholarships were provided by the Jewish Community Foundation of Prescott and two by the Margaret T. Morris Foundation. Additional funding is being provided by the Yavapai Regional Medical Center.

“With your help, I will be better equipped to help support my family, and to give back to this wonderful community once I graduate,” scholarship recipient Shellie Hormann wrote in a “thank you” letter to the JCF. “I want to lead my children by example, showing them the importance [of] education, hard work, and dedication.”

This five-year initiative, intended to address the expected shortage of healthcare professionals in coming years, was introduced in 2012 with generous financial support from the Jewish Community Foundation. Overall, the JCF program will fund 96 full tuition and fee scholarships in the nursing and radiologic technology programs. The largest scholarship program in Yavapai College’s history, it’s designed as a community effort to identify, support and train students who are committed to pursuing a healthcare career locally.