You are here: Home / Education / ERAU Students Excelling on Many Fronts 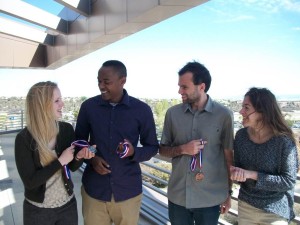 How does it feel to be competing in the world’s largest business career national competition for the first time?

He won medals in tests that focused on financial concepts, accounting analysis and cost accounting.

The Aviation Business Administration major says he was thrilled to compete at a national level against top students from other colleges and universities.

“I know the national competition is tough. I’ll be competing against persons who have majored in something I’ve only had one or two courses in,” he said.

Karuri says his career goal is to work in aviation management, and he anticipates that he will start his own aviation college in his home country of Kenya.

Karuri is not the only ERAU student going to Chicago for the competitions later this month. A team of business students from ERAU-Prescott is headed there to vie for national honors.

During the state competition, ERAU business students not only won – they dominated. The Eagle team won 24 first place finishes in 36 events – the best in the state. When second and third place awards were counted, ERAU collected 61 medals.

But winning for ERAU is not unusual. In fact, it is the norm.

It is the ninth consecutive year the ERAU PBL Business Club has won the state competition.

A first place winner in three events, Michelle Bennett, a sophomore Global Business major from Virginia, says the tests were among the toughest she had ever taken. She won gold medals in business law, economic analysis and future business education.

“I have to credit the faculty of the business department with our team’s success,” she said. “All the faculty who guide us are consistently helpful and resourceful in preparing us.”

Bennett hopes to work internationally in an aviation related business.

Yet another student, Adin Herzog, a sophomore Aviation Business Administration and Global Business major, will compete in economic analysis and decision making tests.

The San Diego student said he will spend hours online and studying textbooks preparing for the national competition.

Herzog says the real credit, though, for student success goes to the faculty. “Our fantastic professors are dedicated to the program and their students.”

His career goal is to work with an airline in an upper management position, possibly in revenue management, he says. “That will let me use economics, one of my passions, in a real-world scenario.”

One student who won a medal but cannot go to the national competition because of a summer job conflict is Mika Davidian, a sophomore Aviation Business Administration major from Roseville, California.

“I regret that I can’t go this year, but I have high hopes for next year,” she said.

Business Department Chair Robin Sobotta, an ERAU faculty member for 14 years, said the three aforementioned students and the others competing in Chicago will be “…highly sought after by employers when they graduate. We’re proud to say that we have 100 percent placement of our business major graduates.”

Sobotta, who earned a Ph.D. in public administration at Arizona State University, noted that typically, ERAU students are offered entry-level salaries in the $50,000 to $60,000 range.

She also said that Boeing International, the world’s largest aerospace industry and the leading manufacturer of aircraft, is a prime employer.

More than 300 students are enrolled in degree programs offered through her department. “It keeps our 10 faculty busy, for sure,” said Sobotta. “We anticipate adding two new faculty because of program growth.”

The FBLA-PBL National Leadership Conference, June 24-27, in Chicago, will have winners from every major college and university in the country competing for top honors through rigorous examinations that test their business knowledge and skills.

“The FBLA-PBL is the world’s largest business career student organization. We at ERAU are extremely proud that our business students swept the Arizona competition by winning first place. Such wins qualify our students to compete at the national level against some of the top universities in the country,” Sobotta said.

The FBLA-PBL post-secondary division has more than 11,000 student members and more than a quarter-million total members when middle school, high school, college and university and professional members are totaled.

Sobotta said FBLA-PBL members are highly sought after by the business and corporate employers.

Considered the pinnacle of FBLA-PBL experience in bringing business and education together, the Chicago conference will see the “best and brightest” involved in leadership events. The organization has forged partnerships with corporations and industries throughout the country to provide scholarships and to underwrite competitive events for students who achieve national ranking.

Through the years, ERAU students have routinely placed in the top 10 nationally.

ERAU Chancellor Frank Ayers praised the student competitors and their PBL club. “The quality and motivation of our business students is unmatched. Led by our amazing faculty, these students take on any challenge and produce great results. These same business students also perform highly successful consulting projects throughout Central and Northern Arizona.”

Ayers was referring to a capstone business course, where students serve as business consultants for actual business and corporate clients.

“Such an experience gives our students professional polish and real-world experience rather than the simulated experiences used at some of the more traditional schools,” Sobotta explained. “That kind of educational opportunity is encouraged by the FBLA-PBL.”

Perhaps “Moe” Karuri captures best the ERAU student attitude when he says, “I expect it to be tough, but I plan on placing nationally. Life is all about the effort you put in, and I believe with hard work, you can accomplish what you want in life.” QCBN

# 1 Comparing their medals from the Arizona Leadership Conference Competition sponsored by the Future Business Leaders of America-Phi Beta Lamba, (l to r) Mike Davidian, Adin Herzog, Mwangi Karuri and Michelle Bennett are among the ERAU team who qualified for the national competition in Chicago, June 24-27.

#2-3 Comparing their medals from the Arizona Leadership Conference Competition sponsored by the Future Business Leaders of American-Phi Beta Lambda, (l to r) Michelle Bennett, Mwangi Karuri, Adin Herzog and Mike Davidian are among the ERAU team who qualified to compete at the national conference in Chicago, June 24-27.

During an Embry-Riddle event the evening before commencement, ERAU was praised by Prescott Mayor Marlin Kuykendall as having “…an often unacknowledged but very significant economic, cultural and educational impact upon the greater community.”

Kuykendall noted that students, most of whom come from out of state or from other countries, often rent homes or apartments, eat and shop in locally owned businesses, and spend thousands of dollars in recreational and entertainment activities.

“Most of the folks in our area really have no idea how much positive fiscal impact ERAU brings to our community. But we at the city follow the numbers, and we know that the more than 2,000 students who attend the university contribute hundreds of thousands of dollars to our economy.”

He also noted that hundreds of parents and friends come to the Quad Cities area to visit students and attend university-sponsored programs and activities. “They spend money.

“But it’s not just the students and their families who contribute to our growing economy. We in Prescott benefit tremendously from the talented administrators, faculty and staff who work at the university, who live here and are an integral part of the community,” he said. “We in the city and the greater community owe ERAU a big thank you for being such a strong contributor to the kind of community we enjoy. Indeed, we in the city are proud to call ERAU ‘Prescott’s University.’”

“Nothing is more rewarding or exciting to see so many talented young people take advantage of the educational opportunities ERAU offers. They bring dynamic new dimensions to your community – and a lot of money.”

ERAU administrative officials anticipate a significant increase in student enrollment in August, when orientation and registration begins for the fall semester. QCBN

Story and photo by Ray Newton