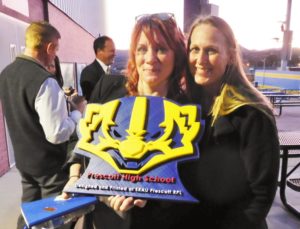 Creative and visionary innovations at Prescott High School (PHS) during the past three months have attracted attention from the greater education community of Arizona, according to Prescott Unified School District Superintendent Joe Howard.

“We admit we’re delighted to introduce two projects at PHS that are unique,” said Howard, commenting that personnel from schools throughout the state are asking if they can visit PHS to see if they can imitate what has occurred.

One is the creative media lab, more commonly called “The Lab.” The sophisticated, highly technology-oriented classroom outfitted with space-age equipment opened in November.

The other is the newly renovated athletic track and field with its artificial turf and Olympic quality composition track, surrounded by renovated bleachers with new railings and lighted by a power-saving, electricity-conserving LED stadium lighting system. It was completed in October.

Principal Mark Goligoski said administrators and school officials from around the state are visiting campus to check out the trend-setting changes.

Impetus for The Lab came from faculty member Robyn Bryce, who had attended a summer workshop at the University of Nebraska. Intrigued by what she learned there, especially the appeal the lab had for students, Bryce returned to Prescott and worked with Jewish Community Foundation (JCF) Executive Director Christine Resnick to create a grant that would finance a sophisticated technology lab.

Bryce’s creative grant proposal was approved for $43,420.31 by the JCF. In a matter of weeks, a former unused woodshop lab behind the school cafeteria was transformed into a media lab. Bryce and her colleagues installed new equipment, including:

A green screen with videotape and digital enhancement capability to provide special effects.

Bryce says students are limited only by imagination in what they can create in the media lab.

Further, a new course, Advanced Modern Manufacturing and Automation, was approved by the PUSD school board in mid-December so students can enroll in an elective class related to computer software, robotics and other high tech topics.

“Because the future does belong to these youngsters, we with the JCF are committed to supporting as many opportunities as we can to expand their educational futures,” said JCF President David Hess. This coupling of STEM – science, technology, engineering and math – to existing curricula is taking students to a new level.”

Embry-Riddle Aeronautical University Dean of Engineering Ron Madler is equally supportive. After touring the lab, he said, “We’re fortunate to have Paul Bunnel, a PHS faculty member who is teaching physical and beginning engineering, as an adjunct faculty member at ERAU. Involving faculty and students at the high school level in such programs has dramatic impact on science education.”

The need to renovate and modernize a decades-old PHS athletic field, coupled with the desire to introduce cost-saving measures, resulted in an enviable track and field complex.

In fact, school administrator Clark Tenney said that shortly after the new field was completed in early October, he and other administrators were contacted by counterparts from throughout Arizona. “We’re told what we have is literally the most contemporary athletic field of any public school in Arizona.”

The $2.5 million renovation of the track and field involved replacement of the former grass playing field with artificial turf at a cost of $1,220,853. Those dollars came entirely from sale of PUSD land sales such as Dexter School, Miller Valley school and the old administration building. A new LED overhead lighting system and bleacher railing came from the same funding source. The composition track around the perimeter of the football field coast $982,582, money that came from the 2015 school district bond election. An additional $400,000 was donated by the McIntyre family, for which the track is named. Those dollars will replace some of the bond money and be used to maintain the track in the future, said Brian Moore, PUSD chief financial officer.

Officials say the school will save more than $30,000 a year in water savings by not having to irrigate the artificial turf.

Moore said the field can now be viewed as a revenue generator as groups and organizations are approaching the school district about renting it. A complete set of guidelines about public use of the field is available online at PrescottBadgers.com.