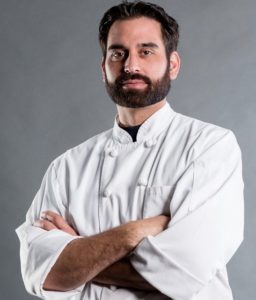 When all the other boys and girls wanted to grow up to be firefighters and police officers, John Panza wanted to be a chef.

“I always kind of gravitated to the kitchen as a kid. If there was a family gathering or party, I was in the kitchen helping out mom or dad, whoever was cooking.”

Panza’s parents are Italian and Lebanese, so he said celebrations were always centered around food.

Now, he is the owner of BiGA, a restaurant that focuses on modern and local food. He shops at the Prescott Farmers Market, supporting local growers and keeping money in the community. “We are out there every Saturday. Most of our customers shop there. You see our employees shopping there.”

Panza was invited to participate in the Devour Culinary Classic at the Desert Botanical Garden in Phoenix. The Feb. 23 event was a local showcase of the state’s top chefs and restaurateurs, with demonstrations, competitions and tastings.

“I was super excited to represent Prescott,” he said.

There were between 50 and 60 vendors displaying their best dishes for the event.

“We served duck with a savory bread pudding, a local carrot puree, dried grape chutney and a pomegranate reduction.” Panza says it did his heart good when “someone came to the booth and said, ‘So this is the duck we have been hearing about all day!’ That was pretty neat.”

Panza first came to Prescott to open the Capital Canyon Club. He was with the restaurant for about two years before he decided to break out on his own. He built a following by offering pop-up dinners around town.

“They were a blast. People got acquainted with us,” he said.

The opportunity to buy BiGA came about two years ago. “It is not a huge place, only nine tables and a bar, but a person never has to wait more than 15 or 20 minutes for a table. We just get them through.”

Local favorites are the roasted chicken entrée, the mussels dish with tomato fennel broth and a burger featuring local beef.

The menu changes constantly depending on the season and what is available.

“We make all our own bread in house,” he said.

In fact, the demand for their bread and rolls by other restaurants is growing quickly.

BiGA, by the way, is an Italian bread starter with fermented flour and yeast.

Standing by his side is his wife, Cassandra Hankison, who is in charge of everything except food.

“You name it, I do it, from keeping the lights on to running out to the grocery store because we need something right now,” she said with a laugh.

Hankison trained to be a pastry chef and met John when she applied at the Canyon Club. They were not hiring a pastry chef at the moment, but they did hire her to head up food and beverage at the restaurant.

Today, their business is booming.

Panza said he always talked about having his own restaurant and being a chef.

After high school, he attended Arizona State University, then culinary school at Scottsdale Community College. He worked for a few places, including a Different Point of View at The Point in Phoenix, before moving to Prescott.