You are here: Home / Community Profile / Marlboro Man in Action at the Grand Canyon 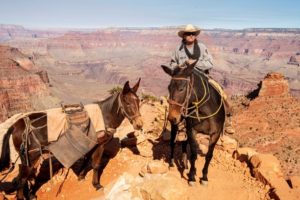 Some boys do grow up to be cowboys, and some cowboys even grow up to be Marlboro men. Such was the case for Grand Canyon National Park Service (NPS) Wrangler Ed Forbis.

Born on a ranch in Deer Lodge, Montana, from the brim of his hat to his well-worn boots, Forbis is a genuine cowboy. His warm country accent and perfectly-shaped thick cowboy mustache portray the rough cowboy on a bucking horse that he portrayed in Marlboro advertisements.

“I grew up living next to Darrell Winfield, who played the famous Marlboro Man for over 30 years,” said Forbis. “He was a horse trader and he’d have about 300-400 horses on his ranch.”

“After I graduated high school, I went to ride colts for Darrell . He’d pick out young dummies like me to get on them brooks and break them in.”

Further down the road, Forbis was hired by Marlboro to ride bucking horses as a stuntman for Marlboro advertisements and television commercials, a job that lasted 12 years. Footage of Forbis riding a bucking horse with a herd of wild stations not only became popular in the United States, but worldwide.

“When smoking advertisements were banned in the United States, other countries who didn’t have regulations picked up the commercials and ran them,” said Forbis.

“Almost all Marlboro’s commercials had footage of wild horses and a cowboy galloping through. It charmed people,” said Forbis. “Most filming was in Wyoming and other states and some filming was in the ocean on the coast of California. We got beautiful shots, but the waves were cold and almost drowned me.”

“When I tell people about my dad, they kind of listen in [disbelief],” said Forbis’s youngest son, Doug, who works as a Crisis Clinician with Terros Health in Flagstaff. “I’m really proud of my dad and I’ll probably tell people about him the rest of my life. We’re close, but due to work schedules, it’s been hard to see my dad as much as I would like.”

Forbis has another son in Scottsdale and a daughter and three grandchildren who reside in Montana.

Rodeoing is also a Forbis favorite. “Bucking horses, bulls, cattle, roping calves, I do it all and love it,” he said. “I never had a desk job in my life and never will. I work on a horse. If I ever had to quit saddling a mule or horse, I’d be done. I can’t imagine myself doing anything else but what I’m doing.”

The worst accident Forbis remembers is when he got bucked off a horse. “I slipped and fell and we both went down. Then the horse got up and stepped on the back of my head. I got 14 stitches and was back at work.”

As a packer for the National Park Service (NPS), Forbis takes supplies down the South Kaibab and Bright Angel trails, sometimes staying at Phantom Ranch.

“Ed is a great guy and great to work with,” said NPS Lead Packer Chris Clark. “He does a good job and he’s a good friend. He’s been with us for about five years.”

Rambo Three and Stagecoach are two movies that Forbis worked in as an extra.

Created by Leo Burnett Worldwide, the Marlboro advertising campaign is noted as one of the most brilliant advertisement campaigns of all time and achieved the goal of bringing a masculine edge to the filtered cigarette, which were considered feminine.

I can describe myself in one word: Simple.

My favorite thing to do:

Rodeo. Team-roping with my horse, Angel.

My favorite place to travel:

Mostly in the United States. I don’t need to go anywhere else except maybe Brazil, great beaches. Also, maybe Canada because there’s great fishing there.

My favorite food and restaurant:

Mexican. Plaza Bonita in the romping town of Tusayan.

The actor who will play me in the movie about my life:

Kevin Costner. Costner seems to ride a horse pretty well. That’s one thing I can pick out in Western movies is how well actors can ride. So many of these new guys don’t ride well – and I can catch it. QCBN