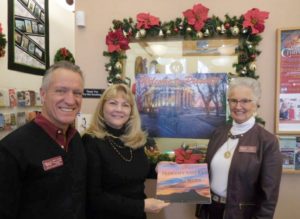 What seemed initially a modest annual investment, $36,000, has resulted in major dividends for the City of Prescott and local businesses, said City of Prescott Community Outreach Manager John Heiney.

Heiney told Prescott City Council members, “All indications are that tourism statistics – number of visitors, dollars spent and taxes collected – are up substantially because of our relationship with Front Burner Media.”

During his remarks at a Nov. 27 City Council meeting, Heiney requested approval of a professional services contract for $36,000 for the coming year. The request was approved.  In fact, two council members, Phil Goode and Billie Orr, praised the tourism marketing efforts, saying those efforts brought people to the community and increased tax revenues that supported other city projects.

For the past three years, the City of Prescott Tourism Office has worked with Heather Hermen, founder and owner of Front Burner Media, a Sedona-based marketing and public relations firm.

Heiney told the council, “Heather is able to spend time to research advertising and marketing opportunities, negotiate rates and deals and gain additional exposure for Prescott through her connections. As a result, we’ve received better placement in publications, more mentions in print and additional exposure as a destination to visit.”

Heiney emphasized the annual $36,000 contract with Front Burner Media is budgeted from the Bed Tax, which is generated from out-of-town visitors.

Robert Coombs, visitor information center manager for the Chamber, said inquiries and walk-ins from international visitors are up significantly from the past.

Thousands of tourists visit the visitor center in the Chamber office at 117 W. Goodwin in downtown Prescott. QCBN