You are here: Home / Education / ERAU Graduates Ranking Among Best For Job Placement 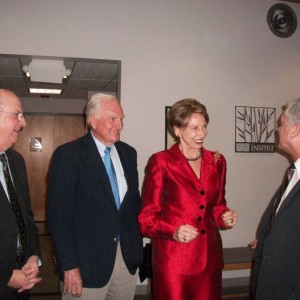 Praising the students as being among “…the brightest ever to earn ERAU degrees,” Frank Ayers, chancellor of the Prescott campus for the nation’s highest ranked aviation and aerospace university, said the graduating students were headed toward career opportunities which were unparalleled.

Commencement speaker Barbara Barrett, board chairman for The Aerospace Corporation, told the students of her research about the success of ERAU graduates.

“According to US News & World Report, your career and employment options are among the best in the country. Data show that 93 percent of you will be employed or in graduate programs within a year of receiving your degrees. That’s exceptional in today’s marketplace,” she said.

She also said that national economic data revealed that the return on investment (ROI) for students who completed degree programs at ERAU were demonstrably better than those from other colleges and universities. It has been said that ERAU is the “Harvard of the skies.”

“Being affiliated with ERAU is great for you and for the state of Arizona. The state is the better off because of the university’s being here.”

Barrett, herself an instrument-rated pilot and the first civilian to land a F/A-18 airplane on an aircraft carrier, told the students they were graduating at a pivotal time in the aviation and aerospace industry.

“The careers many of you will enter are those which have significant impact upon the world’s progress and economy.” The former ambassador to Finland cited the almost exponential growth of aviation and aerospace during the lives of the graduating students. She traced the year by year progress of the industries, starting in 1999, when most the graduating students were born, until the present.

“Planetary and space exploration has been phenomenal. The careers out there for the courageous and the daring are unlimited. You’ll have opportunities for being involved in the new frontiers of discovery that will take you on great and unforgettable journeys,” she emphasized.

John Watret, interim president of ERAU’s Dayton Beach, Prescott and worldwide campuses, said of Barrett when he introduced her to the graduates and the audience, “Barbara Barrett has had a personal career as exciting as anyone I know.” Watret said that Barrett has earned a bachelor’s, master’s and a juris doctorate at Arizona State University. The recipient of six honorary doctorates, including one from ERAU, Barrett trained at the Gagarin Cosmonaut Training Center in Star City, Russia, and at Baikonur Cosmodrome in Kazakhstan and was certified to be an astronaut.

Barrett’s career is commemorated in the Arizona Aviation Hall of Fame. She also served on Arizona’s Advisory Council on Aviation and on the Arizona Astronomy Board.

Barrett joined the ERAU administration and faculty in congratulating those who crossed the stage at the Prescott Valley Event Center.

The university conferred degrees upon graduates from the College of Arts and Sciences, College of Aviation, College of Engineering and College of Security and Intelligence.

In addition to receiving degrees, two graduates were singled out for individual recognition.

Candice Berdahl from Bozeman, Montana, received the Chancellor’s Award for her exemplary academic record and scholar achievements. The recipient of a degree in Global Security and Intelligence, Berdahl completed two unique internships. One was for the Navy Engineering and Logistics Office in Washington, D.C. The other was with the U.S. Department of State Office of European Affairs in Vienna, Austria.

Receiving the Ed King Community Service Award was John Sami, from Boomtown Township, New Jersey. Sami was recognized for “outstanding contributions of time and talent to the local community and the university, and for maintaining a high grade point average.” An aeronautics major, Sami worked with the Dean of Enrollment management to establish the university’s first executive corporate-sponsored diversity-driven scholarship.

Nineteen graduates were commissioned as officers for the U.S. Armed Forces.

Chancellor Ayers commented of the commissioning that he had been told that the ERAU commissioning class was the “largest in the country” for the Air Force this year. QCBN