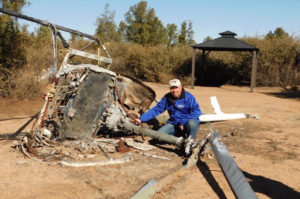 Almost immediately after the deadly crash of the helicopter carrying retired NBA star Kobe Bryant and eight others, Embry-Riddle Aeronautical University (ERAU) began receiving calls. ERAU has the only teaching crash site laboratory of any university in the world. ERAU, along with the Federal Aviation Administration, National Transportation Safety Board and FBI, were among those trying to understand what caused the Sikorsky S-76 to crash at almost 170 miles per hour on Jan. 26, about 30 miles northwest of Los Angeles.

ERAU crash investigation experts at the Aircraft Crash Investigation Laboratory not only respond to requests from organizations and agencies around the world, they also train students in aviation safety. “In fact,” said Ed Coleman, director of the Robertson Safety Institute (RSI) and department chair of the safety science program at ERAU, “it’s the most popular minor at the university.”

Teaching students about aircraft safety and accidents goes far beyond textbook assignments, Coleman said.  Much of what the students learn is through “hands-on, boots in the dirt,” tedious analysis of actual aircraft wreckage.

To do that, the crash lab has 14 actual aircraft carefully placed in a secured area behind the Robertson Safety Institute. Coleman has 22 years of experience as an Air Force pilot and safety officer. He explained the wreckages are scrupulously arranged on the site, based upon actual photographs, diagrams and other documentation of the original crash site.

For example, the wreckage of a Robinson helicopter is scrambled over several hundred yards, just as it was when the wreck was recovered. Aircraft fragments – from the tail rotor and chopper blades to the cockpit-cabin compartment and all the rest – are meticulously arranged to mimic the scene where the crash occurred. “We even recreate the gouges in the earth that the wreckage makes when it hits the ground,” said Coleman.

The same is true of a California-based twin-engine Cessna Caravan that crashed in 1997 into remote tree-covered terrain. That crash killed all nine people on board and scattered debris extensively.

Coleman explained that students spend intense hours studying crash sites. They first try to find the flight recorder, often called the “black box,” even though it is orange in color. They examine everything from burn patterns on the skin of the plane to the angle of impact when the aircraft hit the ground. “It can take weeks of investigation before final conclusions are reached.”

Responding to the question of how ERAU acquired all the aircraft included at the site, Coleman said they were donated through the years. The most recent acquisition is a Beechcraft donated by Honeywell Corp.

No military or jet aircraft wreckage are yet included at the crash site lab.

Other wrecks are arranged so students can have a comprehensive view of what an actual plane crash does to an aircraft and to people. In what might seem a macabre but necessary component of teaching crash site investigation, artificial body parts are placed where they were found at crash sites. “We do this to give students the intensity of what happens,” Coleman explained. “Our four faculty members – all experienced – are serious about giving students realistic training in what to look for.”

It’s not just students who receive training. In a few weeks, a group of professionals from England will be arriving at the ERAU campus for crash site training, as England has no similar facilities. Visitors have come from many other nations, too.

Visitors from the general public also may tour the secured site, but must first check in through personnel at the RSI. Crash lab manager Adolfo Ibarra says the value of the laboratory is inestimable and must be protected. “What we have here is unique in the world. It is a practical learning laboratory without equal.”

Lessons to be learned from formal training at the RSI are intense, says Coleman. “In aviation, safety is first, always.” QCBN