You are here: Home / Local News / Arizona Family Jewelry Business Announces the End of an Era 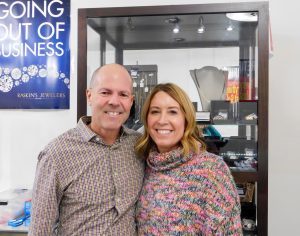 The entire stock of Raskin’s Jewelers is being liquidated. That’s not just diamonds and other precious stones, or men’s and women’s premium watches; it’s also fixtures, furniture, cabinets, engraving equipment, laser welder – everything in the building – ending a 76-year era in Arizona with the closure of one of Prescott’s premier downtown businesses.

Greg Raskin, the affable owner of Raskin’s Jewelers, told Quad Cities Business News, “You know, I can’t begin to tell you how many people have told me things like, ‘My grandparents got their engagement and wedding rings at Raskin’s. My parents got theirs there, too. And so did we.’”

Raskin’s grandfather, Melvin Raskin, came to Arizona after World War II and opened the family’s first jewelry store at Central and Adams in downtown Phoenix. “My father, Lynn Raskin, moved to Prescott in 1963, where he opened a store in what was then Park Plaza Shopping Center on Goodwin Street,” said Greg. “Over the years, my family has operated stores in four different locations in Prescott, but our now historic location is smack-dab across the street from the Courthouse Plaza on Gurley. Been there since the late ‘60s.”

Following the holiday liquidation sales, Greg and his wife, Renee, will close the doors one last time. “Now, absolutely everything is for sale, and the bargains will be unbelievable,” he said. More than $4 million in merchandise is on sale, some at discounts of up to 70% off. All sales are final.

Noted Western artist and sculptor Bill Nebecker and his wife, Merry, talk about how much the Raskins have helped with charitable causes such as Big Brothers Big Sisters. The Nebeckers purchased their wedding rings in 1963 from Raskin’s. “The Raskins have offered the community unbelievable friendship and support,” said Bill. Merry added, “These people are like family to the entire town.”

Praise for the Raskins and their impact on the area comes not only from their fellow businesses but also the education community. “Greg and Renee Raskin give back so much to the community,” said Prescott Unified School District Education Foundation Executive Director Paul Kirchgraber. “We are thrilled they will remain here after the closing of Raskin’s Jewelers. They have been wonderful supporters of PUSD and its foundation for years. After all, Greg was a 1984 high school graduate and Renee was a former administrator at PUSD. They have a strong commitment to public education and community achievements to the entire community.”

Raskin grew up working in the store after school and during holidays with his dad. He then attended the University of Arizona, graduating in 1988. He then worked for a corporate retail management firm in Washington, D.C., but decided to return home in 1991. He and Renee have owned and managed the store since. Greg’s mother, Arlene, still works in the store occasionally. Greg and Renee say their two adults sons, Alex and Drew, have no interest in continuing the jewelry business. The Raskins said they want to retire while they are healthy, while business is good and while they still have time to do things on their own terms.

Renee will continue working as chief deputy for the Yavapai County Education Service Agency. Prior to that, she had worked as chief financial officer for the PUSD.

“We love Prescott,” said Greg. “We have great friends and I want to mountain bike even more – my favorite activity.”

He says the relationships that formed and developed through the years are key to Raskin’s Jewelers’ success. “I loved getting to know our clients and their families over multiple generations.” QCBN